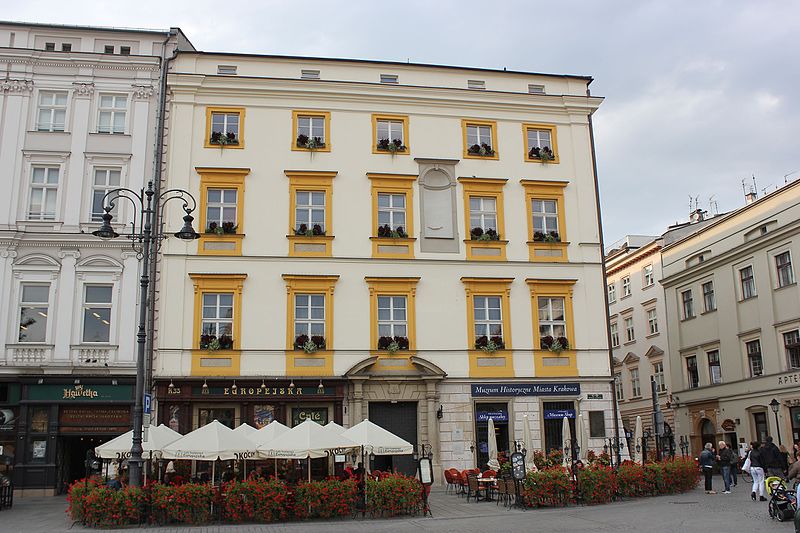 Krzysztofory Palace is one of the most important townhouses in the Krakow Main Square. Now Baroque in style, this town palace has a long and vivid history. Today, it houses a branch of the Historical Museum of Krakow dedicated to the everyday life of the inhabitants of Krakow from past centuries.

At first, the Krzysztofory Palace was a Gothic townhouse built in the second half of the 13th century. In the next centuries, it was in possession of wealthy burgher families. Only the most affluent people could afford a house in such prestigious location. The name of the building – Krzysztofory comes from St. Christoph (Krzysztof in Polish), a patron of the medieval house. 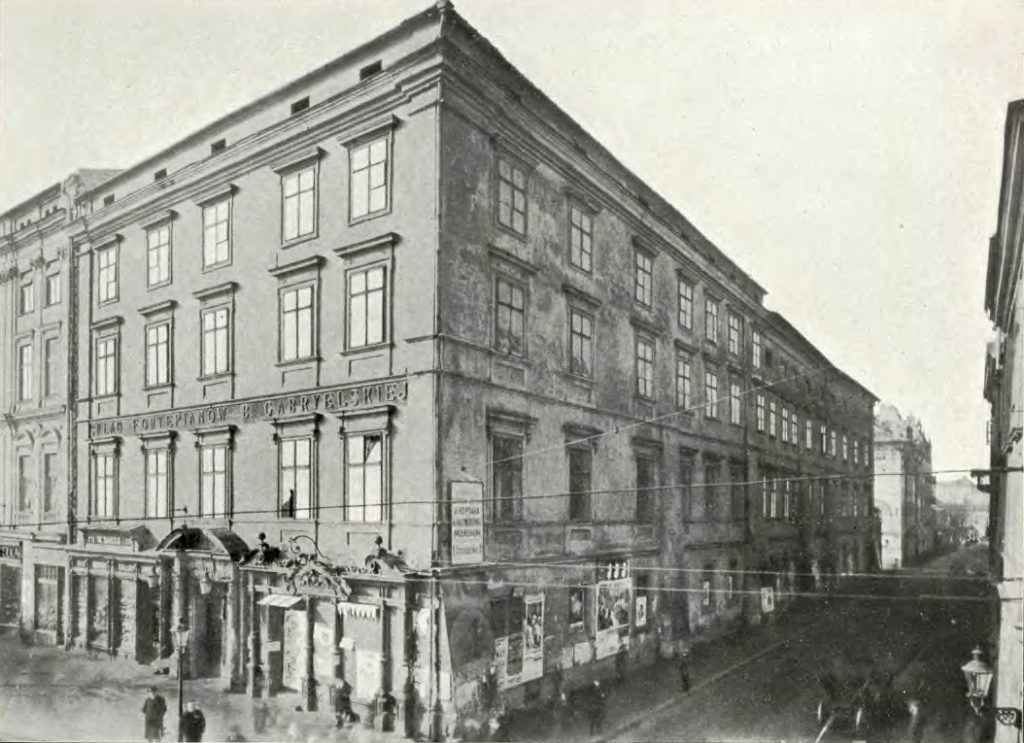 In 1644, the Palace was bought with two neighbouring houses by the Court Crown Marshall, Adam Kazanowski, who planned to turn them into a royal residence. The buildings were joined and rebuilt on an L-shape plan. A cloister and an arcaded gallery were added.

At the end of the 17th century, a series of refurbishments had been conducted in the Palace, which left it more magnificent than ever before. Decorative stucco, preserved until today, was made by Italian sculptor, Baltazar Fontana. The representative character of the building was emphasised with the great hall, the colonnade in the courtyard and the interior of the rooms on the first floor (piano nobile). Recherche furnishing of the Palace was widely admired. The furniture was so exquisite that it was lent to the Wawel Royal Castle for the celebrations after the coronation of King Augustus II the Strong (1697).

After 1726, further reconstructions were led. As a result, the facade was rebuilt in accordance with the Baroque mode, with stone cladding and adorned with a portal. Changes were also made in the interior of the Palace. The beautiful polychrome decoration was made in the rooms. In some of them, it can be still seen today.

Thanks to a great renown of the place, many distinguished guests had visited the Palace over the years. It had been in possession of several Polish noble families. In the 17th century, two of Polish kings – John II Casimir Vasa and Michael Korybut Wisniowiecki had lived there for some time. In 1809 the building became the headquarters for the Prince Jozef Poniatowski. During the Krakow uprising of 1846 and the Spring of Nations in 1848, Polish authorities settled in the Palace. 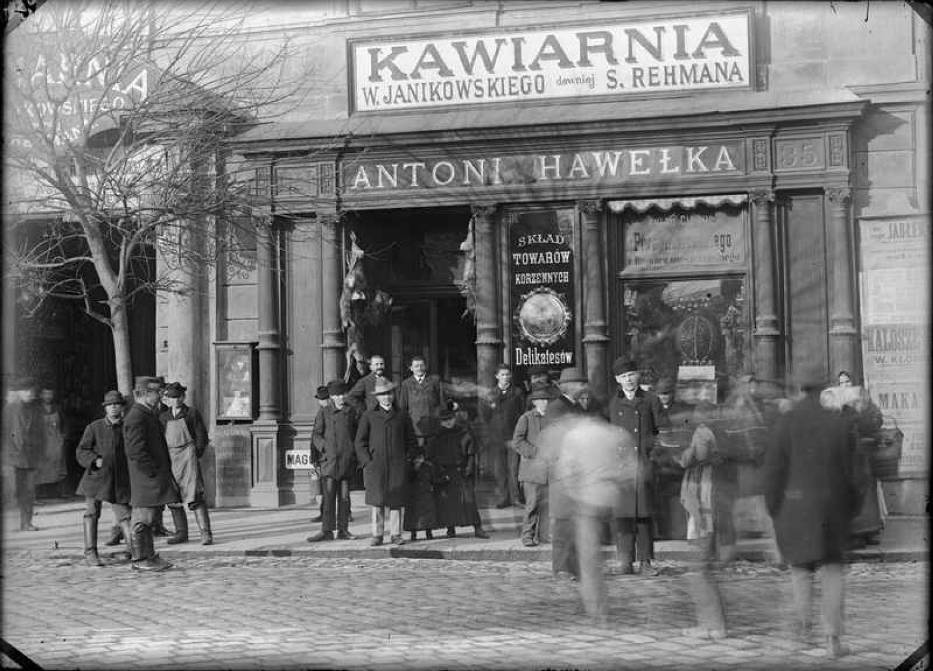 Antoni Hawelka spice-shop and café, photography by Ignacy Krieger, circa 1913

The Krzysztofory Palace is also important due to its impact on the local culture. Here, the editorial office of the conservative journal “Czas” (“Time“) was located at the end of the 19th century. Antoni Hawelka, a well-known figure in Krakow, merchant and purveyor to the imperial court in Vienna had a spice-shop and later, a cafe. Today, located in the same place, restaurant “Pod Palmą” reminds of the bygone 19th-century Krakow.

In 1965, Historical Museum of Krakow gained jurisdiction over the Krzysztofory Palace. A branch of the museum was established. It is dedicated to the material culture, political and economic history, art, traditions and customs of the inhabitants of Krakow from the earliest times to the present day.

The most valuable objects in the museum’s collection are paintings that depict the city and its monuments, important events in the history of the city and portraits of its eminent inhabitants by Jacek Malczewski, Stanislaw Tondos, Erazm Fabijanski, Michal Stachowicz, Juliusz and Wojciech Kossak.

A collection of memorabilia related to the history of guilds and several vistas of old Krakow enable to see how the city looked in the past centuries. A unique collection of glass plates of photography by Ignacy Krieger brings back to life the scenery of every-day Krakow of the 19th century. 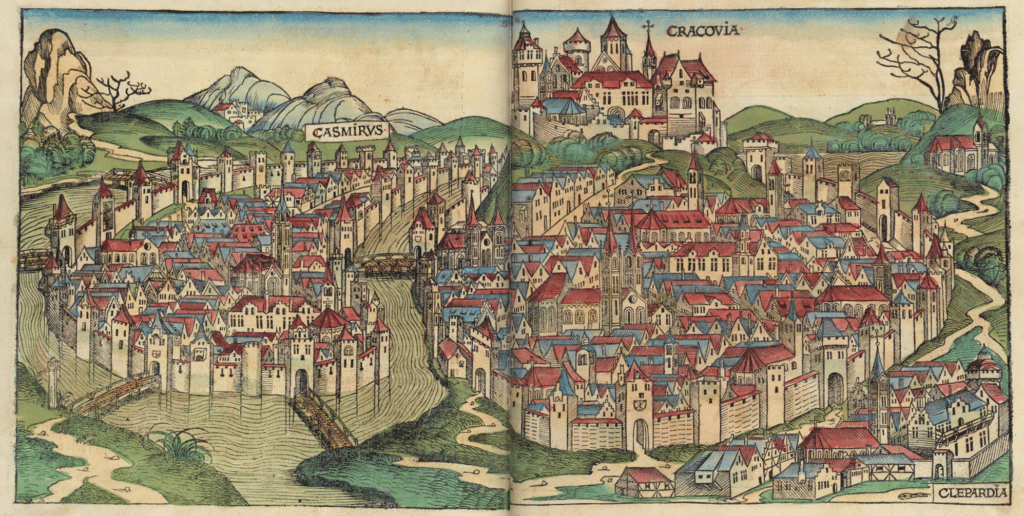 The permanent exhibition of the museum in the Krzysztofory Palace is titled “Cyberteka. Krakow − time and space”. The exhibition focuses on the urban development of Krakow from the ancient times to the period between 1909 and 1915.

Since 2008, a dedicated workshop in the Historical Museum of Krakow has been working on creating three-dimensional models of the city, in terms of both, urban planning and architecture. Its main aim is a reconstruction of how Krakow looked like in the past centuries.

The exhibition is divided into six sections:

* Booking tickets in advance is adviced.