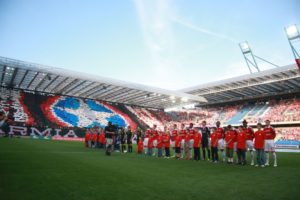 The club’s symbol – the white star visible on tribunes

Wisla Krakow FC is one of the best Polish football clubs. It regularly presents excellent skill in league championships and international tournaments.

Wisla Krakow was founded in 1906 by students of the Second Practical School and their professor, Tadeusz Lopuszanski. The white star has been the symbol of the football club ever since. It is found in the club’s emblem, uniforms and is often mentioned by club supporters in slogans and songs.

Wisla Krakow FC is in the top of the most successful Polish football clubs. The club has won 13 national titles. In the 1978-1979 season, the club managed to reach the quarter-finals of the European Cup. 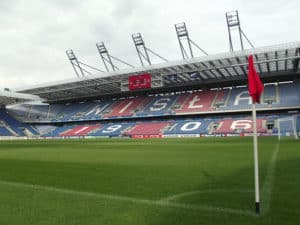 Wisla’s stadium is located near Krakow Blonia. The stadium has a capacity of 33,268 spectators. The stadium was originally built in 1953 and reconstructed in the years 2003-2011.

Since 1906 there has been a rivalry between Wisla Krakow and the second biggest Krakow football club, Cracovia. The two teams’ over a hundred-years’ old antagonism has been called “The Holy War”. The term was first used after the first derby of 1908, resulting with a 1:1 draw. The “war” has been continuing ever since. The stubborn fight between two teams has received the dubious title of the most intense rivalry in Poland and one of the most intense in all of Europe.