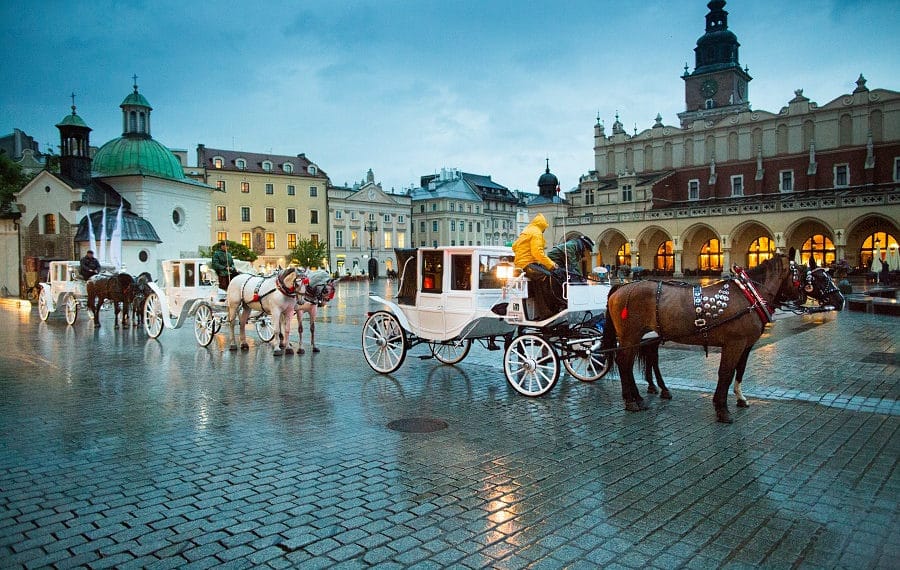 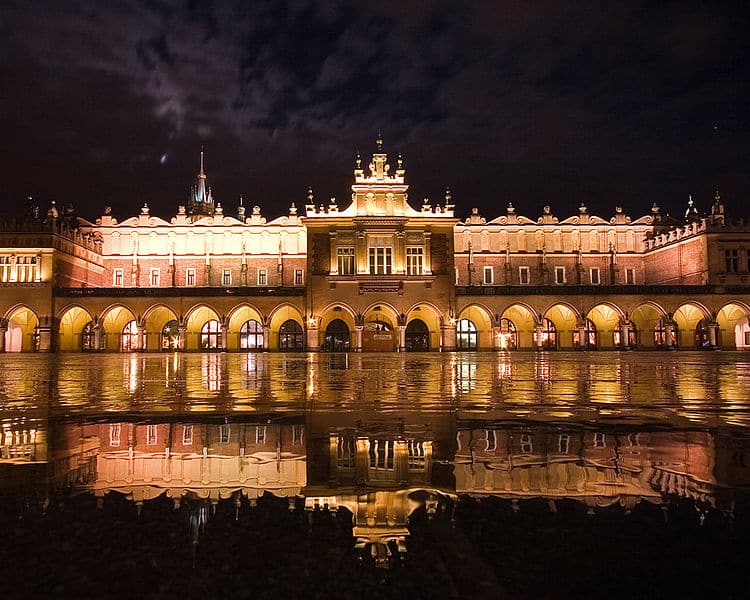 The majestic building in the centre of Krakow’s Main Square – Cloth Hall (Sukiennice in Polish), has stood there for almost seven centuries. It has now become one of the city’s best landmarks.

The Cloth Hall has been the heart of the trade in Krakow from city’s very beginning. For centuries it had welcomed local and international merchants. During its golden age in the 15th century, a variety of exotic products imported from the East were sold there – spices, silk, leather and wax. Exported from Krakow were textiles, lead, and salt from the Wieliczka Salt Mine.

History of the Cloth Hall

The Cloth Hall was a subject to many changes over the centuries. In 1257, with the establishing of the city of Krakow, first stalls were installed in the middle of the Main Square. The wooden stalls were built in two rows that created a little pathway in between. A century later, King Casimir III the Great, decided to build a new, Gothic Cloth Hall. Two rows of stalls were covered with a roof to create a central hall, over a 100 metres long, with eighteen stalls on both sides. They opened to the inside of the hall with ogival or semicircular portals. On the south and north side, double arched arcades were built. The shape of that building resembled today’s Cloth Hall. The Gothic Cloth Hall survived to 1555 when it burned down in a fire. 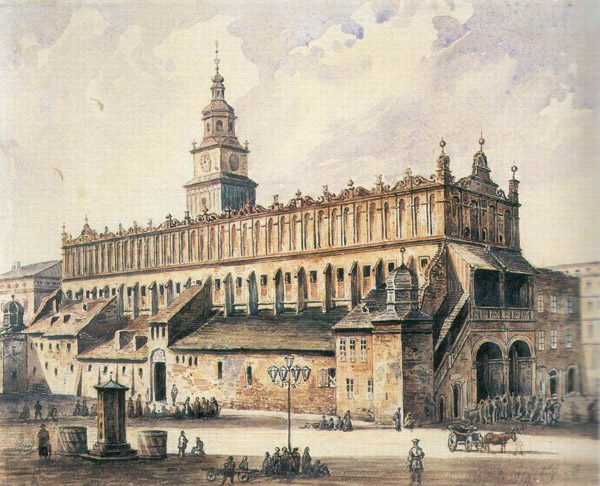 Painting of the Cloth Hall in the Renaissance

In the next years, the Cloth Hall was rebuilt in the Renaissance mode. It was crowned with pilasters and gargoyles as adornments on the facade. Also, loggias with columns were built on both sides. In 1601 a transection through the main hall was built and the entrances in the middle of the facade were decorated with avant-corps.

In the 19th century, the Cloth Hall was rebuilt again. The lower area was transformed into a hall with stalls as it is today. In 1895, its ceiling was decorated with crests of Polish cities and guild emblems. Arcades were added around the building. On the top of the eastern facade masks depicting caricatures of the then presidents of Krakow were placed (designed by Jan Matejko). The upper floor has been converted into the first exhibition hall of the newly established National Museum in Krakow. 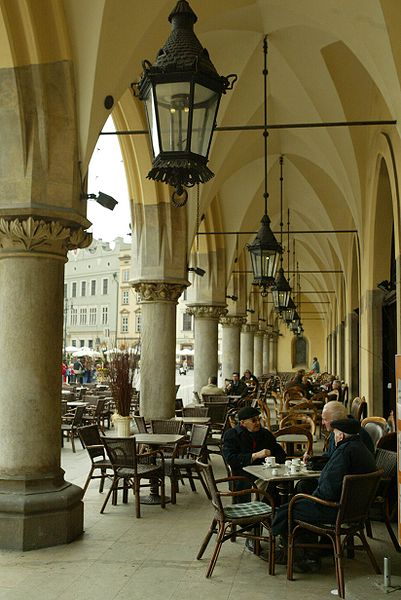 Arcades of the Cloth Hall

The Cloth Hall is still the most bustling area in the entire Main Square. Today, mostly jewellery, souvenirs, amber and various arts and crafts can be bought in the Cloth Hall. Around the Cloth Hall, fairs and concerts are often organised. On the ground floor there is a popular cafe, that opened in 1912. What is curious, under the arcaded porch, there is an original gas lighting preserved that is still in use today.

On the top floor of the Cloth Hall the Gallery of the 19th-century Polish art, a branch of the National Museum is located. It shows masterpieces of Polish art and sculpture from the times of partitioned Poland.

In 2010 yet another tourist attraction was opened in the Cloth Hall, or, to be exact, underneath the Cloth Hall. Years of archaeological research conducted in the Main Square resulted in excavating extraordinary traces of medieval Krakow. The Rynek Underground exhibition shows the area of the Main Square in the medieval times, including authentic cobbled tracks.