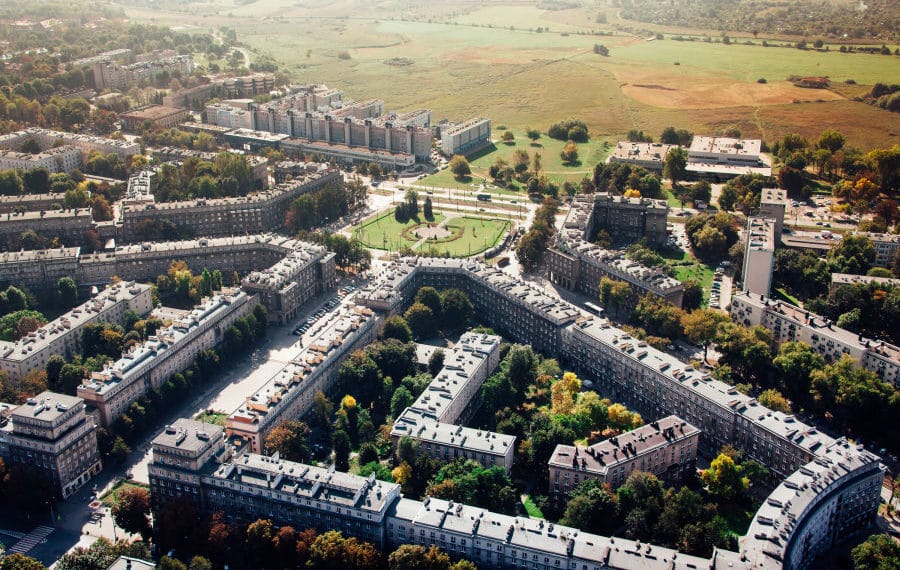 Nowa Huta is today the easternmost district of Krakow. Conceived in the late 1940s as a separate city, it was a realisation of the Stalinist utopia. The city developed around a giant Lenin Steelworks created there to put thousands of people to work in the proletarian spirit. Nowa Huta was supposed to overshadow the ancient capital of Poland. It was to be a harbinger of the new, better order introduced in Poland by the communist government. Creating of the city and of the steel mill itself was strictly ideological. Although Nowa Huta grew rapidly in the 1960s, two decades later it began to collapse just as the whole communist domination in Eastern Europe.

The Stalinist brainchild was to be an ideal proletarian city and a hallmark of communism. It was obviously utopia and city’s glorious years quickly faded away. However, Nowa Huta is an example of an excellent urban concept. It is worth to perceive Nowa Huta from a different perspective. It is a well-designed, functional city with interesting socialist realism architecture. 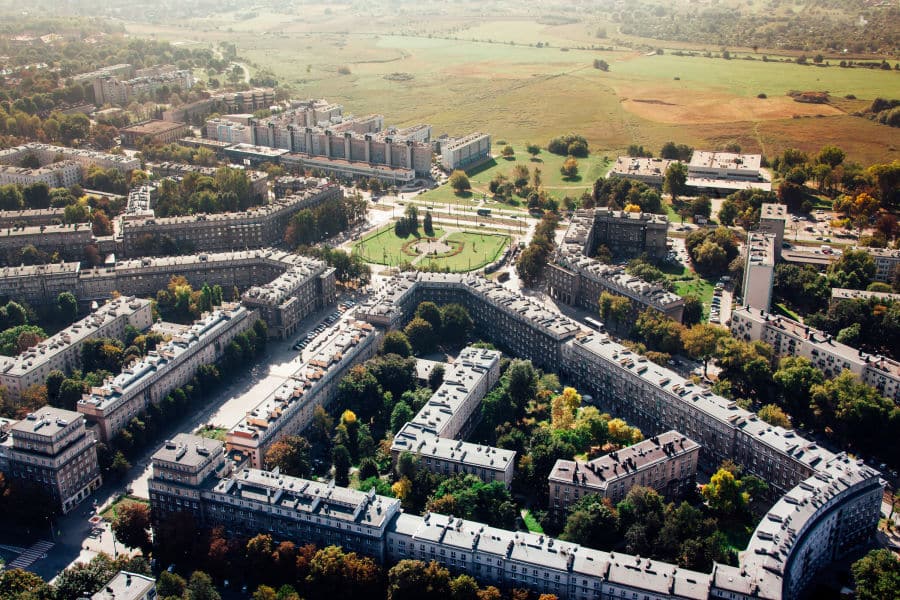 In 1949, the team of architects led by Tadeusz Ptaszycki began to work on the design of Nowa Huta. The urban concept adapted a wide range of solutions. The pan of the city was based partly on classical Renaissance city. The streets run radially from the Central Square, creating a spider’s web. In Nowa Huta, all principles of the socialist realism were applied. A characteristic feature of the composition is axial symmetry. The heart of the city is the Avenue of Roses and the Central Square, although architecture on both sides is not perfectly mirrored. It is rather a far-reaching similarity with significant differences in details. 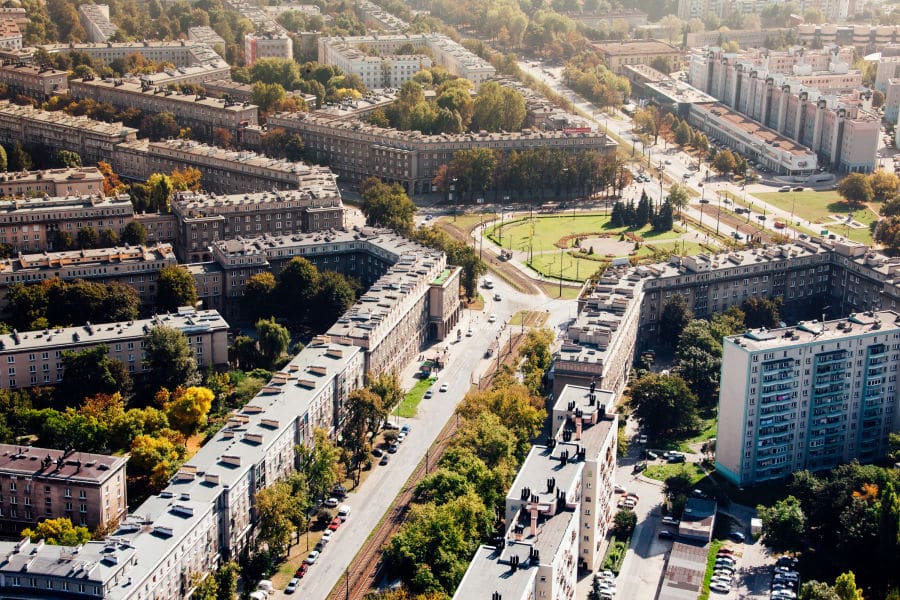 Structure of the city was based on the Anglo-Saxon concept of “neighbourhood unit”. The main aim of the units was to provide the necessary infrastructure for the community – food outlets, shops, nurseries and schools, located inside the unit. Units consisted of close quarters with quite a compact composition and lots of greenery around. This type of buildings was more economical but also utilitarian. The place was supposed to be friendly to its residents and satisfy all their needs. But it also enabled mutual control between the residents, on which the communist ideology put an emphasis. 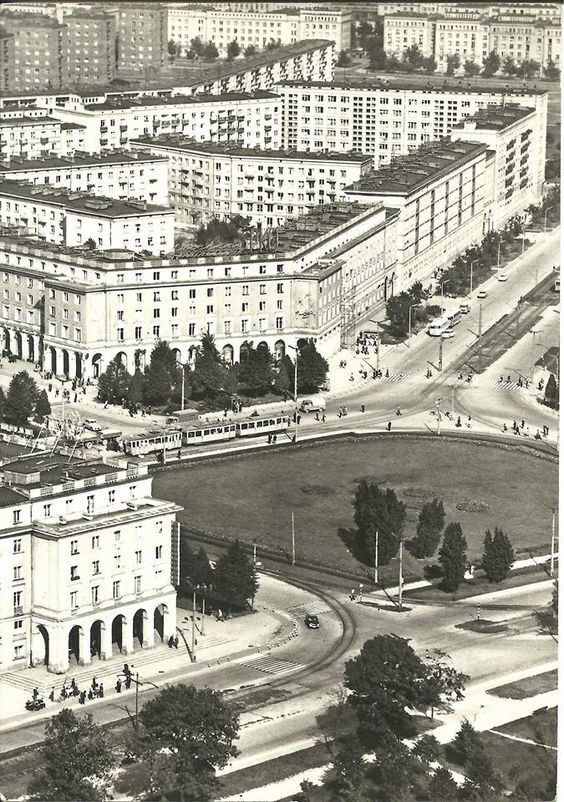 1950’s photograph of the Central Square in Nowa Huta

In assumption, socialist realism was to be compact, clear and unambiguous. Special attention was paid to greenery. Nowa Huta was built accordingly to the idea of a garden city. Greenery was introduced simultaneously with the execution of residential buildings. It should not be forgotten, however, that although designers of the city made every effort to ensure that its residents lived comfortably, Nowa Huta was, in fact, a vehicle of communist propaganda. 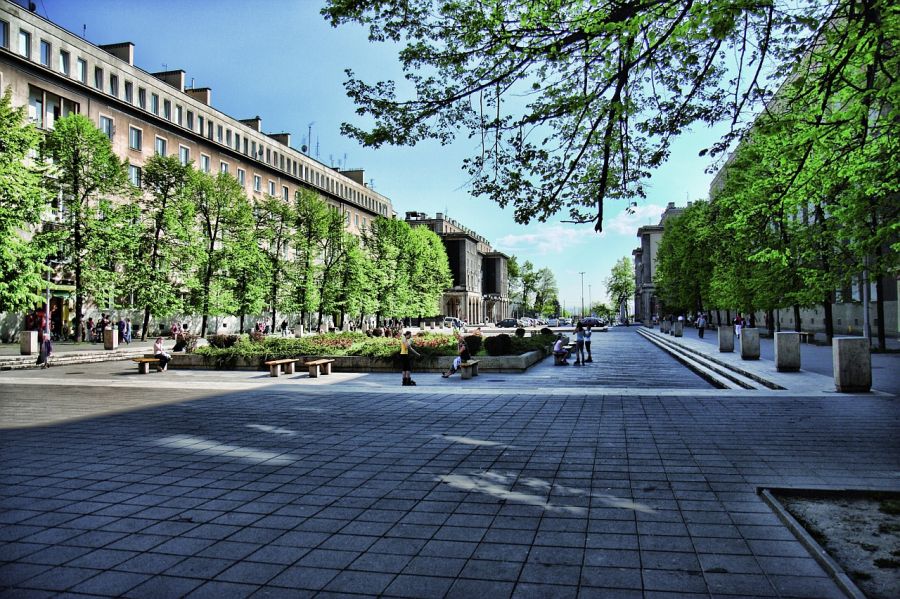 Perpendicularly to the Central Square runs the Avenue of Roses. In the 1960’s and 1970’s, rows of beautiful roses were planted along the way. The Avenue ended with Lenin monument, perfectly visible from the Central Square. Monumental buildings along the avenue served as decoration to frequent demonstrations and celebrations. All of it was supposed to be a tool for shaping the new generation of citizens.  In 1979 the monument was blown up. Unsurprisingly, the residents of Nowa Huta generally did not sympathise with the communist regime. After the fall of communism in Poland, the monument was dismantled. It was an important symbolic act, cheered by thousands of spectators. 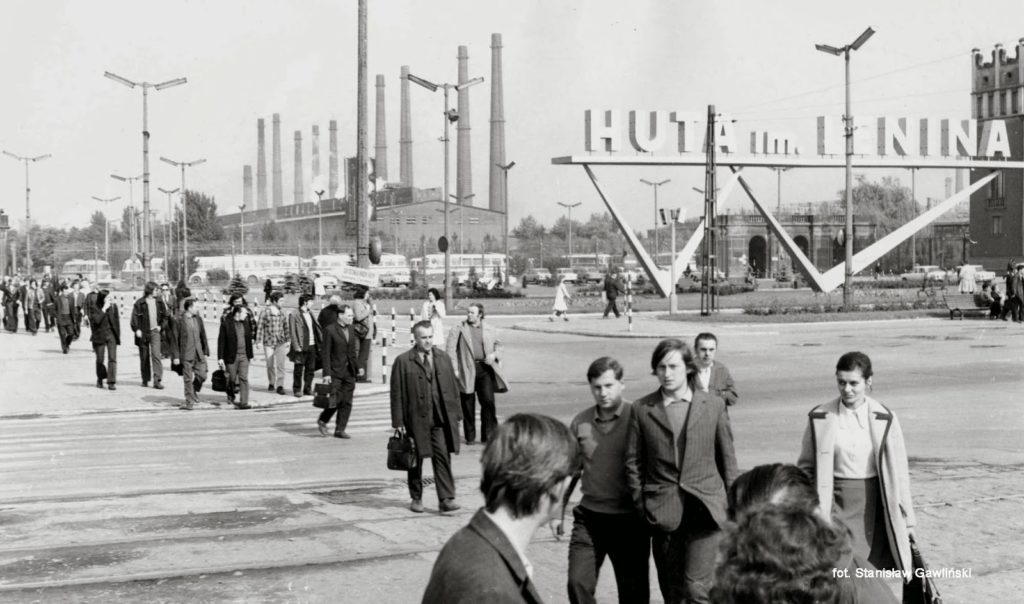 Employees outside the Lenin Steelwork, circa 1970

A vast majority of Nowa Huta residents worked in Lenin Steelworks. The giant factory was planned to be built conveniently just 2 km from the Central Square with Lenin Avenue (today Solidarity Avenue) running directly to the steel mill. It opened in 1954 and quickly became the biggest steel mill in Poland. In the 1970’s the factory expanded its production lines to tobacco and cement. The reasons for establishing such factory and subordinate to it industrial city were ideological. The demand for steel in Poland was relatively small. During the 1980’s, many demonstrations and violent street protests of the Solidarity movement took place in Nowa Huta. At that time, almost 29.000 of the 38.000 workers of the steel mill belonged to the Solidarity trade union. 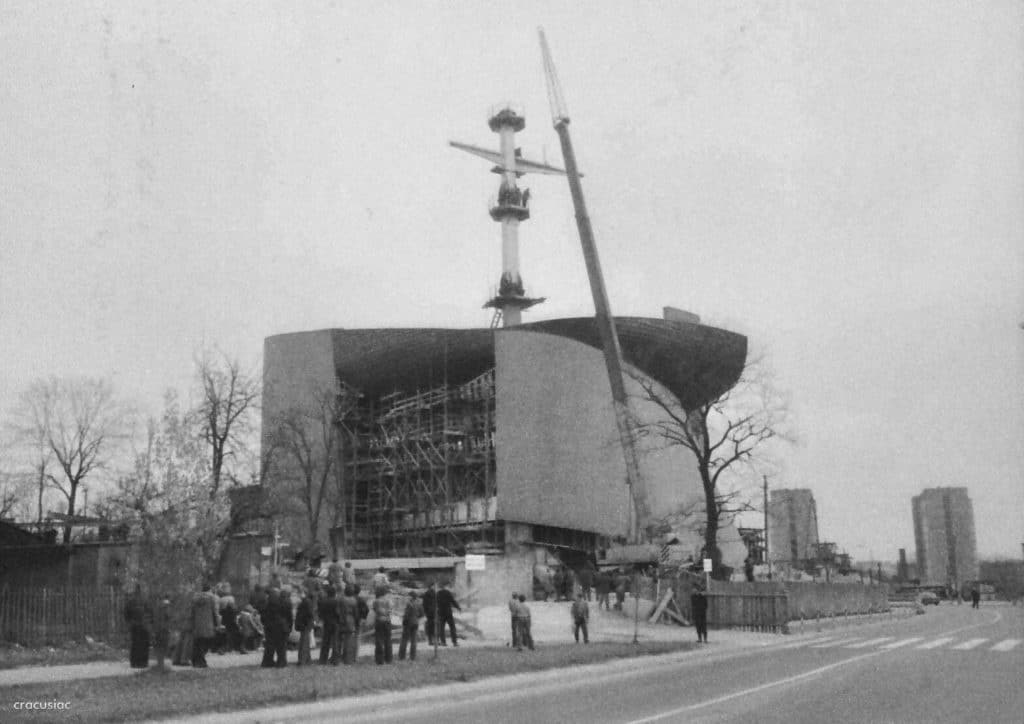 Construction works of the first church in Nowa Huta, The Arc of Lord Church, 1972

The lack of any religious temple in plans of Nowa Huta was a manifestation of an anti-Church attitude of the communist authorities in Poland. Initially, upon people’s request, the government agreed to construct a church. In 1957 a cross stood in a place of the future church. In the following year, however, the government requested to remove the cross. It was decided that the lot on which the church was to be erected, would be adapted for the purpose of the “1000 schools for the millennium” programme. When workers began to remove the cross, residents of Nowa Huta stood in its defense. The protest was suppressed, the cross destroyed and 2 million zlotys collected by the locals, confiscated. Permission to build a church was granted years later, thanks to constant efforts of bishop Karol Wojtyla. In 1977, The Arc of Lord Church was consecrated.

Although the original project of Nowa Huta was never fully realised, the city is still impressive in its form. Created in the spirit of an ideal proletarian city, Nowa Huta evolved into an interesting Krakow district.  Nowa Huta attracts new generations that appreciate its urban concept, social infrastructure, and greenery at one’s fingertips. Nevertheless, there is still not enough culture to attract intellectual circles that prefer Krakow Old Town due to its many cafes, cinemas, museums, etc. Having thrown off its communist spirit, Nowa Huta awaits the fresh approach. 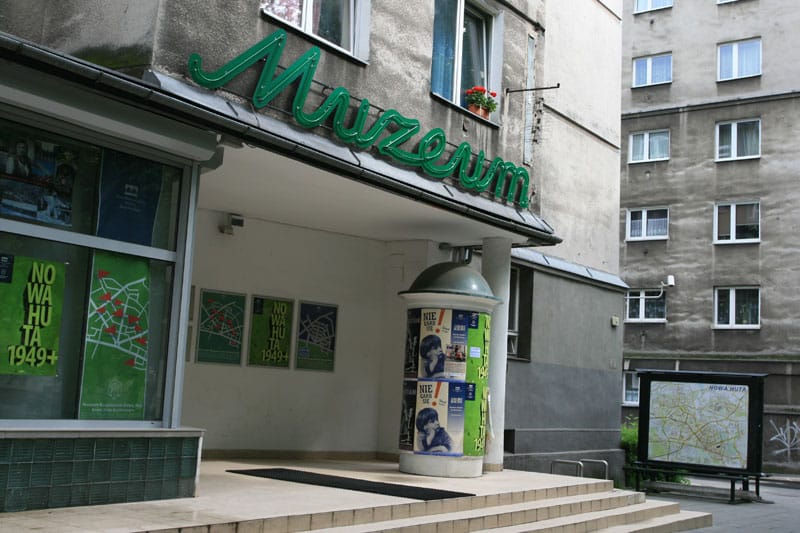 One of those institutions that work hard to change the stereotypical thinking about Nowa Huta is the Historical Museum of Krakow. The museum operates based on the concept of Eco-museum. It cooperates with various institutions and individuals in Nowa Huta, often in historic or important for the history of the district buildings. The main exhibition hall is located in typical business premises on a ground floor of a typical residential building. The museum focuses on promoting knowledge about Nowa Huta through theme workshops, temporary exhibitions and, above all, walking tours. It also puts special emphasis on the history of this place before it actually became Nowa Huta and was a complex of small villages outside of Krakow. Not much of those times remained preserved until today, but some of the most valuable landmarks include Jan Matejko Manor House, Cistercian Abbey, St. Bartholomew’s Church and Wanda Mound.

For more information about the museum’s offer, please visit http://www.mhk.pl/branches/history-nowa-huta-quarter 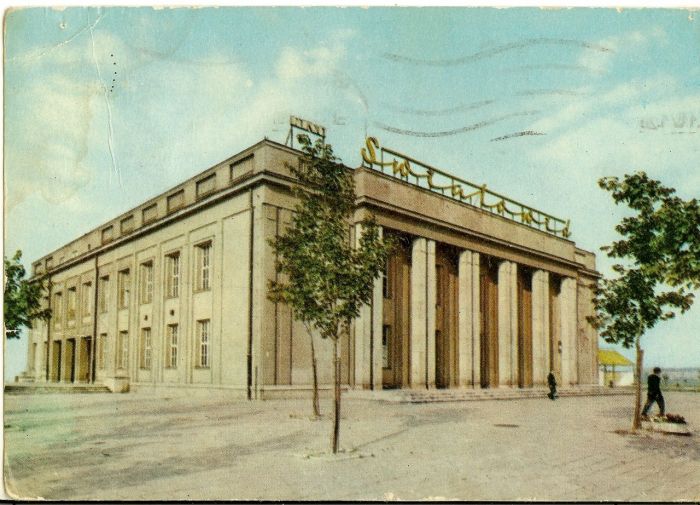 Swiatowid Cinema, postcard from the 1960s

Another noteworthy institution in Nowa Huta is PRL Museum, dedicated to the history of Polish People’s Republic and the communist regime. It is located in one of best landmarks of Nowa Huta – a monumental building of the former ‘Swiatowid‘ Cinema.

The museum aims to be the place where various aspects of the history of PRL would meet. It initiates discussions and debates about this period in order to show its many shades. The museum wants to focus on that what was undeniably bad and also emphasise the positive attitude and achievements of people living in those difficult times. The museum collects various memorabilia and archival material of political, social or economic provenance.