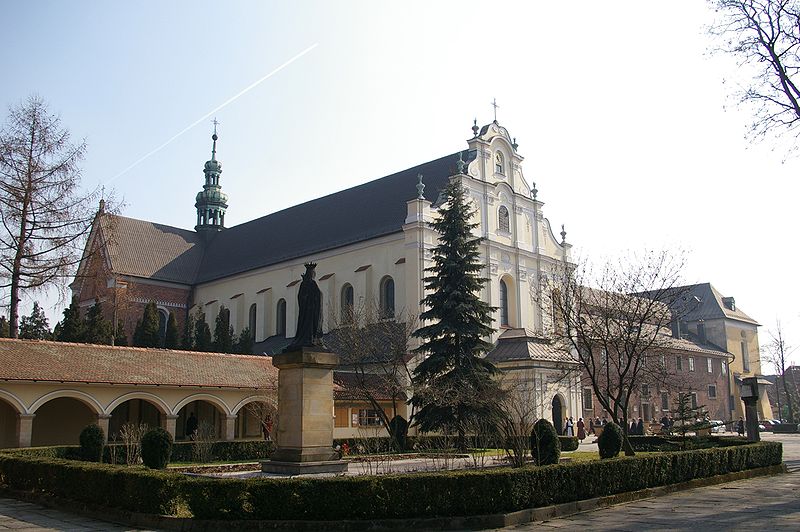 Cistercian Abbey in Mogila (today in Nowa Huta district) is one of only a few monasteries in Poland that have been active continuously since its setting-up. Around 1218 the Cistercian Order was invited by Iwon Odrowaz, bishop of Krakow to settle in Mogila, build a monastery and help to jettison the remains of paganism in the region. The works led under the eye of the first Cistercian abbot in Mogila, Peter, were interrupted in 1241 by the Mongol invasion, that resulted in the monks being killed and the monastery destroyed. The consecration of the Cistercian Abbey in Mogila took place in 1266 in the presence of the Prince, Boleslaw V the Chaste and his wife, Kinga. 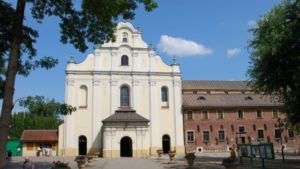 Facade of the Basilica in the Cistercian Abbey in Mogila

The reign of king Casimir III the Great (1333–1370) saw the biggest development of the Abbey and the king himself made a few generous donations, for example, to build cloisters and refectories. In 1389 the Cistercians established their own lead mill and foundry of lead tiles, and in 1469 copper and silver smelter. Many clerics from Mogila studied at the Krakow Academy, and some even gave lectures there.

In the Renaissance, the Abbey grew to its full glory, with its library filled with rare books and manuscripts. During that time also a great artist, Stanislaw Samostrzelnik, had worked in Mogila, leaving exceptional paintings and polychrome. The Cistercian Abbey in Mogila was very popular amongst Polish monarchs, who often came there for solitude and prayers. In the 19th century, during the Partitions of Poland, the Abbey’s continuing activity was protected by laws of the Free City of Krakow.

Basilica in the Cistercian Abbey 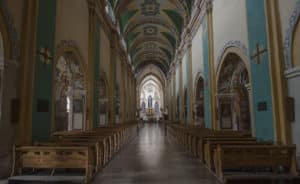 Interior of the Basilica in the Cistercian Abbey

The church was built between 1222 and 1266 of brick with stone architectural details, in early Gothic style, preserving numerous elements of Romanesque style. The vaulted ceiling of the main nave was rebuilt after a fire of 1780. The interior of the church is decorated with polychrome. Gothic frescoes survived on several windows frames. Chancel, transept and south chapels are decorated with the 16th-century polychrome by Stanislaw Samostrzelnik. In 1970 the church was elevated to the rank of basilica minor by Pope John Paul II.

Sundial on the southern wall of the Basilica is adorned with words “Adducam contra te tempus” – I will lead you against time – and reminds the monks to live their lives according to their vocation – “Ora et labora” – for the glory of God and the benefit of mankind. 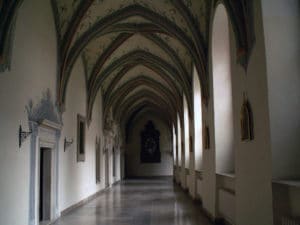 Cloisters in the Cistercian Abbey

In the Gothic cloisters built during the reign of Casimir III the Great, there are Gothic and Renaissance gravestones moved here from the Church of the Holy Cross as well as the 13th-century portal. One of Abbey’s treasures is the library and archive located in the southern part. They are available only for scientific purposes. Adjoining the Abbey is a beautiful and well-groomed garden.

Visiting the Cistercian Abbey in Mogila

The Cistercian Abbey in Krakow is the country’s most important, but it is pleasantly void of the attention of tourists, with a small exception of Catholic Church holidays. The Cistercian Abbey is situated in Nowa Huta, so it can be visited along with other landmarks in the district, such as the Socialist realism architecture or Wanda Mound.

Visitors are welcome to see: the Chapel, the Basilica, cloisters, the chapterhouse, the former calefactories, as well as the garden. There is also the possibility to visit the former parish church of St. Bartholomew.

Organised groups are received after prior notification by a guide – that will ensure the better use of time spent in the Cistercian Abbey.