Trail of the Eagles’ Nests

Trail of the Eagles’ Nests comprises of 25 medieval castles that were built to secure the southern borders of Kingdom of Poland and its capital – Krakow. Most of them were  built on orders of king Casimir III the Great in the 14th century and their aim was to protect the southern parts of the Kingdom from the danger of Czech invasion.

The reign of king Casimir III the Great (1333-1370) saw huge development of Polish monarchy, administration, economy, etc. The king enjoyed strong support from the upper class (szlachta) and worked hard to ensure the stability of the state. To protect the southern borders and the capital, a chain of fortresses was built, comprising of royal castles and private residences as well.

Trail of the Eagles’ Nests connects Krakow with Czestochowa. The castles are called Eagles’ Nests, because they are located high on rocky outcrops of Polish Jurassic Highland and resemble the nests set up by eagles. The castles were almost impregnable and stood in defence of the southern borders for a long time, but as warfare changed, they were gradually turning into picturesque ruins blending in with the beautiful landscape.

The need to preserve the castles of the Trail of the Eagles’ Nests was first addressed in 1930. The preliminary plans were made but were left neglected until 1948. That year the unique Eagles’ Nest Trail was charted and instantly became the most attractive tourist trail in Poland. Today, the trail starts in Czestochowa, runs through 25 castles located on the way to Krakow and finishes just at the foothills of Wawel Royal Castle. 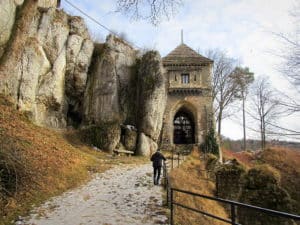 Gate to the castle in Ojcow, Eagles Nest Trail Poland

The castle in Ojcow was built in the second half of the 14th century on orders of king Casimir III the Great. According to local tradition, the name of the fortress, in its original form Ociec – old Polish version of Ojciec-Father, was given by the king himself, in the memory of his father, Wladyslaw the Elbow-high who found refuge in nearby caves during his battle to win back the Polish throne. 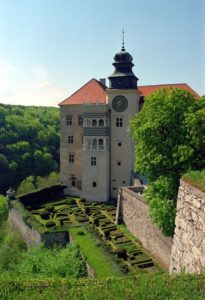 Pieskowa Skala, the only Renaissance castle on the Trail of the Eagles’ Nests

The castle in Pieskowa Skala was first mentioned in a document issued in 1315 by Wladyslaw the Elbow-high. In the first half of the 14th century, his son rebuilt the castle as part of the Eagle Nest Poland defensive chain. In the years 1377-1608 the castle was the seat of Szafraniec family, whose most famous representative was the voivode of Krakow Piotr Szafraniec. Some later representatives of this family were mostly robber knights and used the castle as a starting point for attacks on merchants passing through the valley on a route connecting Krakow and Silesia. In 1484, Krzysztof Szafraniec, great-grandson of the first owner, was beheaded at Wawel for his misdemeanours.

In the years 1542-1580 the Gothic castle was transformed into a Renaissance residence. In the 17th century a system of bastion fortifications was added. It is the pearl of Polish Renaissance, the only castle on the Eagles’ Nests Trail, which survived in such good condition. Click here to learn more.

The castle is located on the highest outcrop of Polish Jurassic Highland, rising at 515,5 m above sea level. In the middle of the 14th century a Gothic castle was built – the seat of the knightly family of Wlodek Sulimczyk. 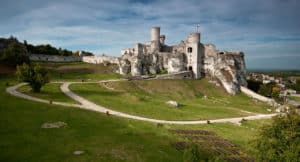 The fortress was perfectly integrated with the area. On three sides it was covered by high rocks, and the circuit was closed by a stone wall, leading through a narrow slit between the rocks. In 1523, Ogrodzieniec Castle was bought by Jan Boner, a wealthy burger from Krakow and manager of Royal Salt Mine in Wieliczka. After his death, the castle was taken over by his nephew Seweryn Boner, who rebuilt it into a Renaissance residence between 1530 and 1545. In the lowest tier of the tower, fragments of Renaissance frescoes depicting lilies are preserved.

In the nearby village there is a chapel built from the elements taken from the castle (portal, volute, cornice). Inside is decorated with original equipment from the castle, mostly from the chapel that was situated in the gate tower – keystone vault, cannonball, which was to fall into the castle during the Swedish Deluge and Renaissance statue of Virgin Mary. 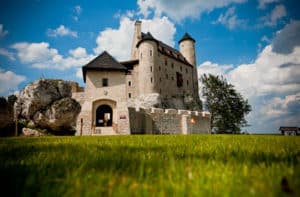 The castle in Bobolice was built by king Casimir III the Great most likely around 1350-1352. In 1370 his successor, Louis the Hungarian gave the castle to his relative Wladyslaw, duke of Opole. Nine years later, Wladyslaw leased the castle to his courtier Andrzej Schoene of Barlabas, who used it as a fortress for his banditry escapades.

Wladyslaw Jagiello, the next king of Poland, decided to intervene and return the castle back to royal possessions. Andrzej Schoene still managed the property and later the castle was split between his grandson and son-in-law. From that time on, the stronghold was owned by a number of families and was gradually falling into disrepair. When in 1683 king Jan III Sobieski was on his way to Krakow for the concentration of Polish troops before the Vienna rescue, he stayed the night at Bobolice Castle, but his retinue had to stay in tents.

Today’s structure is an effect of restoration works carried out in the early 2000s. The castle was rebuilt based on original framework and archaeological research. There were no plans nor drawings of the castle from the 16th-17th century, so it is possible that the way the castle looks today, it had looked in the past, but the decision to rebuild it was widely criticised.

The castle in Olsztyn had probably existed long before the Eagles’ Nest defensive chain was charted. At first it was just a watchtower, but with the orders of Casimir III the Great, it was rebuilt and fortified. According to tradition, in this castle, the voivode of Poznan, Macko Borkowic, was imprisoned for organising a plot against the king and died from starvation. Apparently, the spirit of Macko still haunts the castle and groans, shouts and sound of shackles scare the visitors to this day. 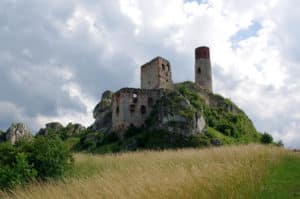 In 1370 the castle fell into hands of the aforementioned Wladyslaw, duke of Opole. King Wladyslaw Jagiello won the castle over, but it was not the end of the struggles. In 1587, the castle was attacked by the army of the archduke Maximilian Habsburg, claimant to Polish throne. The castle crew fought off the attack but the commander had to see his little son’s kidnap and death. During this fight the castle was severely damaged and it became the motif of several literary works.

Ultimately the castle fell into disrepair after the Swedish Deluge. In the 19th century the local community used the castle as a resource of bricks and stone to build, amongst other, a parish church. To date, the outline of many buildings survived, but the most effective are two towers: the bergfried and the square tower. Currently the castle holds many cultural events, including knights’ tournaments.

Most of the castles along the Trail of the Eagles’ Nests are open for visitors. The castles are also perfectly visible from afar, so tourists are also welcome to take a walk around the ruins.