What to see in Vienna? – Top 5 Attractions

Vienna is hard to describe by words and you’ll understand why as soon as you arrive there. Adjectives such as: wonderful, gorgeous, luminous, incredible or mesmerising are not enough. This city in northeastern Austria is a mixture of the imperial heritage left by many years of powerful dynasties and innovations created by artists, architects, entrepreneurs and hipsters. Everybody can discover Vienna in their own way – by choosing the best from this immensity of culture, history, traditions and new ideas.

Here are some attractions that you may not want to miss while visiting Vienna for the first time.

It’s not easy to choose one best museum from hundreds of them in the whole city. Each offers different experiences, histories and memories – from the Mozarthaus Vienna and the Strauss Museum to the Vienna Observatory, the Globe Museum or the Esperanto Museum.

However, if you were to pick only one for your first visit in Vienna, it is definitely worth seeing the Natural History Museum. Even if you are not a museum-lover, you will probably spend at least a few hours there.

Opened in 1889, the Museum presents a rich collection of heritage of several austrian monarchs, installed in 39 exhibition halls. The most impressive collection is the one of various species of birds, animals, insects, dinosaurs and stones, which is why even kids love that place. The Museum is also famous for its biggest and oldest public exhibition of meteorites, including even the one from Mars, called “Tissint”. You will also see some unique objects such as the Venus from Villendorf or gigantic skeletons of dinosaurs!

What’s more, you will have a chance to see the Digital Planetarium, which offers fascinating virtual space trips to the Milky Way and Saturn.

There are different tours and workshops for groups and individuals organized in the Museum everyday. It includes guided tours with a dinner at the roof of the museum or even a night at the museum ending in the morning with delicious breakfast!

The legendary Prater Park (Wiener Prater) is located between Danube and Donaukanal. It’s the oldest amusement park in the world, opened in 1897. However, it is not only its history, that attracts so many people, but also the unforgettable experience offered to its visitors. The most popular objects inside are the  Wiener Riesenrad Ferris wheel (65 meters high!) and the giant roundabout called Praterum (117 meters high!) from which you can admire breathtaking views. 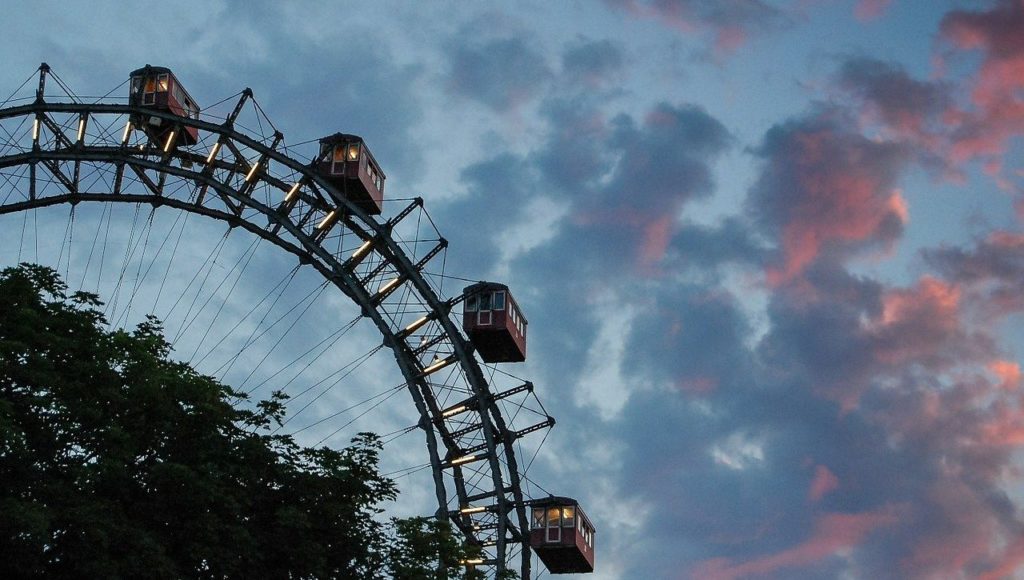 There are as many as 250 different attractions for kids and adults. It includes roller coasters, roundabouts, big wheels, gokarts, a haunted house, the Madame Tussauds, the Museum of Chocolate, restaurants, cafes and many many more.

Every evening this place turns into a big celebration of lights, laughs, screams and music. Although the Park is an absolute legend of the city, it is so big, that nobody waits for a long time for their desired attractions.

At the same time, Prater is also a place of recreation and sport. A lot of people walk, run, ride a bike or a scooter. In other words, you can enter the Park in the morning and in a moment find yourself leaving it in the evening.

If you like architecture and palaces, you simply can’t miss another extremely important object in Vienna, which is the Schönbrunn Palace. Some will say that it is too popular, too crowded and a little bit too corny place – don’t buy it! The number of its visitors is the best proof of its mesmerizing atmosphere, that is definitely worth experiencing.

The Schönbrunn Palace, built in the XVIII century, is one of the most important cultural heritages and main attractions in Austria. This historical residence of the Habsburgs, located in the Heiting district, was listed as one of the UNESCO World Heritage Sites in 1996. 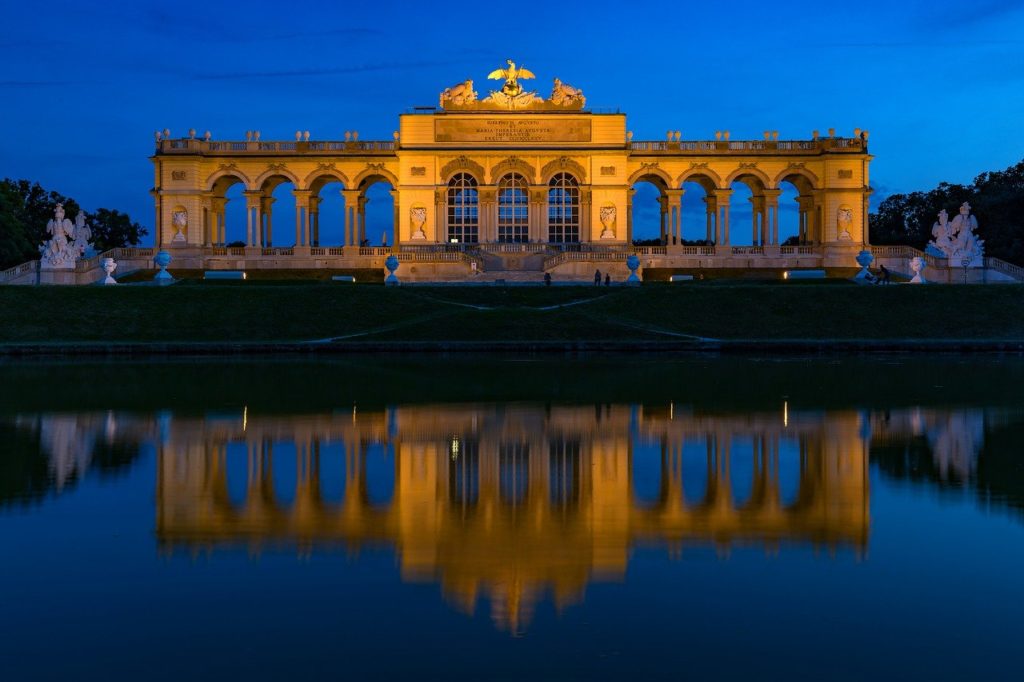 There are a lot of things to see inside the Palace, where one can find 1441 rooms, including 45 open for visitors.

During guided tours you will find out not only about the fascinating history of the Habsburg powerful dynasty, but also about the favourite snack of its most prominent figures. Among various chambers, you will have a chance to admire the Mirror Room, where the first Mozart’s concert took place. Equally impressive is the Millions Room, regarded as one of the most beautiful rokoko chambers, that was used by Maria Theresa as a private reception room.

Be prepared for incredible ornaments, decorations, paneling and handicrafts from India or Persia scattered all around, that can astound even the most demanding visitors and palaces connoisseurs.

The Palace is surrounded by the Great Parterre(a scenic park with french gardens), a palm house and the most popular gloriette in the world. 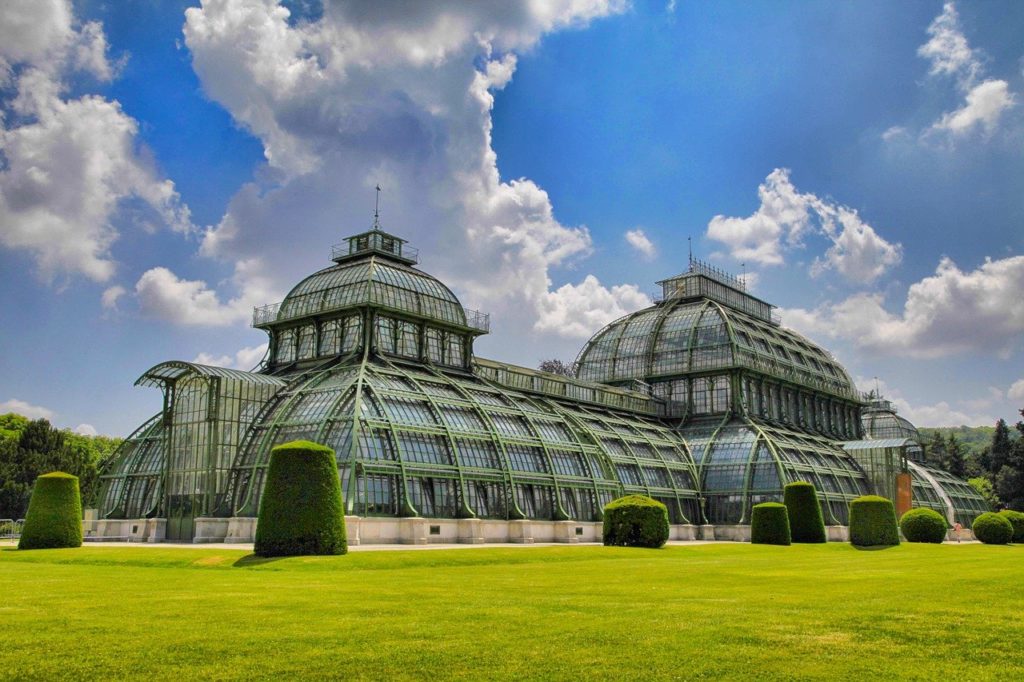 Another proposition for fans of beautiful architecture and places with fascinating history. The Hofburg is one of the biggest palace complexes in the world. It used to serve as the Habsburg Dynasty’s residence and now it is the official house of the president.

It is not difficult to spend your whole day in the Palace as it offers so many incredible places to check. If you can’t devote too much time to the visit, you should definitely see at least some of its most characteristic attractions. One of them is the Spanish Riding School, where Lipizzaner horses performances are organized for tourists. The Austrian National Library amazes with its baroque interior, while the Silver Collection will give you a chance to discover the shiny and sophisticated culture of courtly dining in its various forms.

You should also visit the Imperial Apartments (with its splendid decor) and the Sisi Museum, that presents a compelling history of one of the Palace’s most interesting characters – Sisi.

Don’t forget to visit the good old “Steff” in the central park of Vienna – the Stephansplatz. It is one of the most beautiful Gothic sacral buildings in Europe and another magnificent symbol of Vienna. The area around the Cathedral is always full of people, city noise and individuals trying to sell you something. However, it’s definitely to fight your way through the crowd and enter this historical building.

St. Stephen’s Cathedral has 4 towers (with the highest one of 136-meter high) and an original roof with 230 000 tiles arranged in coats of arms of Austria, Vienna and Habsburg. There are 23 bells located in the four towers, from which one is particularly popular, as it is the biggest one in Austria – Pummerim (“Boomer”).

Inside the Cathedral one can see magnificent interiors with lots of ornaments, paintings and sculptures from both medieval and modern times. Among all this splendour and richness of architecture, it’s worth to spot gothic Wiener Neustadt Altar, the High Altar and marble Frederick III’s tomb. For those who like visiting mysterious and a little bit darker places, there are undergrounds with catacombs of the Habsburgs and some key figures of Austria.

You can see both St. Stephan’s Cathedral and the catacombs with a guide to find about the fascinating history of one of the most powerful dynasties in Europe.