Aaron was the first abbot of Benedictines, who were brought to Krakow by Casimir I the Restorer. According to some records Aaron was born in the Cologne. He became the fifth bishop of Krakow in 1045, after Czech prince Bretislav destroyed Gniezno in 1048 he became the archbishop of Poland.  The legend says he was also the first abbot of Benedictine monastery in Tyniec, but according to the documents the monastery was founded only in 1075. Aaron died in 1059 and was buried in Wawel Cathedral.

Aaron’s shield looks like three golden crowns on the silver field. It is used as the official shield of Krakow chapter till today. You can see it on some buildings in Krakow Old Town owned by Krakow chapter. The other theory says that this shield was modelled on the shield of Cologne chapter, as according to the legend Three Kings were buried in the Cologne Cathedral. 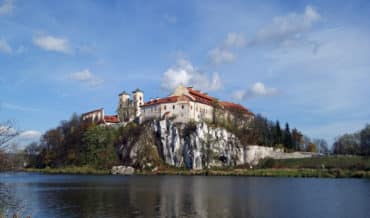 Tyniec – Benedictine Abbey
Origins According to local tradition, Benedictine Abbey in Tyniec near Krakow was founded in 1044 by Polish prince Casimir I the Restorer. As the Polish state was very young at the time and after a deep crisis, the Benedictines were to support the reconstruction of Church and state. The monastery was built

Wawel Cathedral
History of the Cathedral The Cathedral on the Wawel Hill is a place of worship of top significance. It is due to the role that temple served over the centuries. From the reign of the very first King of Poland, Boleslaw Chrobry, son of Mieszko I, the Wawel Hill was
Comments
All comments.
Comments
Cancel Reply