Located was at Sławkowska 32 street. In the past, there was a hotel “under Sobieski” here. In the years 1882-1883, it was rebuilt according to the design of Karol Zaremba into a palace for Countess Brandysowa, and later for the Baden family. In 1921, the belvedere was built according to the design of Józef Pokutyński. The famous cafe of Noworolski’ – Literacka cafe was located on the ground floor. An Italian cafe was to be built on the first floor by the Germans in 1939-1945, but the reconstruction was not completed in time. After the war, it housed the Association of Polish Journalists, after them the building returned to its pre-war owner – the Catholic Scientific Institute, then there was an Artistic and Graphic Publishing House, then the National Publishing Agency, and then the School of Management of the Jagiellonian University.

Rate this post
Share:
Suggested
Suggested contents and articles.
Suggested Contents
Palaces
There was no room for a palace in the urban concept of Krakow. It was a building that was contrary to the assumptions of the founding city, limited by defensive walls, where every square meter of area was worth its weight in gold. The thirteenth century urban planner divided the 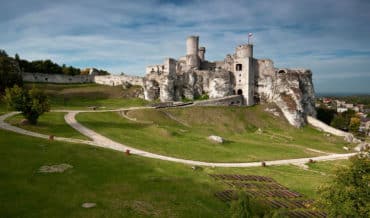