Blessed Queen Jadwiga was the wife of Władysław Jagiełło and the queen of Poland. She was born in 1374 in Hungary, died in 1399 in Kraków. In her childhood, she was engaged to Wilhelm Habsburg, but then she was assigned to the Polish throne and her engagement was broken. In 1385 she became the queen of Poland, in the same year the Polish-Lithuanian union was concluded in Krewo, in which Jagiełło undertook, after marrying Jadwiga and assuming the Polish throne, to introduce Christianity in the Latin rite in Lithuania and to join the Grand Duchy of Lithuania to Poland.

In 1399 Jadwiga gave birth to a daughter who died after 3 weeks, and a few days later Queen Jadwiga died. She was buried in the Wawel Cathedral, and in 1979 she was beatified by Pope John Paul II. She handed over her entire will to the Krakow Academy, which makes her a co-founder of the Jagiellonian University. Together with Władywsław Jagiełło, she was also the founder of several churches. There are many mementoes of the queen at Wawel Castle.

Rate this post
Share:
Suggested
Suggested contents and articles.
Suggested Contents
Wawel cathedral treasury
The present treasury building was built by Hanusz Blatfuss from Koszyce. Valuable items have been collected there for centuries. According to the inventory from 1563, there were 120 chalices, crosses, reliquaries, pacificals, chasubles and capes. Defeats, robberies, wars, confiscations caused a great impoverishment of the treasury. The Treasury repeatedly helped 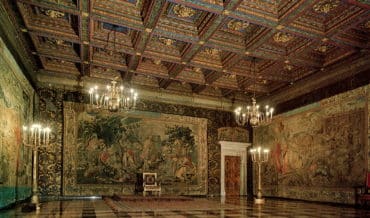