Czartoryski Museum (Muzeum Ksiazat Czartoryskich in Polish) is the oldest museum in Poland. It was established in 1796 in the Czartoryski family Palace in Pulawy, in 1878 moved to Krakow. Its exhibition consists of collection of national heritage, masterpieces of European art (13th-18th century) as well as ancient Egyptian, Etruscan, Greek and Roman art and Islamic decorative arts.

The Czartoryski family was one of the most prominent and influential magnate family in Poland. Members of the family for centuries had had close relationships with the royal court, the most important magnates of Poland and Lithuania and had been developing foreign affairs with other European countries. 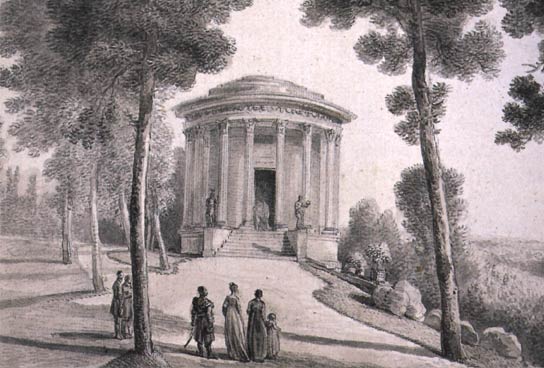 “Temple of Memory” in Pulawy, the original venue of the Czartoryski Museum, 19th-century engraving

The Czartoryski Museum has been established by the matriarch of the family, Princess Izabela Czartoryska. In 1796 she began to collect various memorabilia and art objects to preserve Polish heritage during the Partitions of Poland. The first objects in Princess’ collection were trophies commemorating the victory against the Turks at the Battle of Vienna in 1683. At first, Princess Izabela stored all of her memorabilia in her Palace in Pulawy. With the increasing amount of items in her collection, Princess Izabela ordered a construction of the „Temple of Memory” in the residence gardens. It was a monopteral building inspired by the Temple of Vesta in Tivoli, Italy.

It became the very first museum in Poland and opened in 1801. The exhibition featured historical artifacts from the Wawel Cathedral and the Royal Castle as well as other objects donated by Polish noble families. The motto for Princess’ museum was “The Past to the Future” (“Przeszlosc Przyszlosci” in Polish) and it is carved above the doorstep to the Temple. 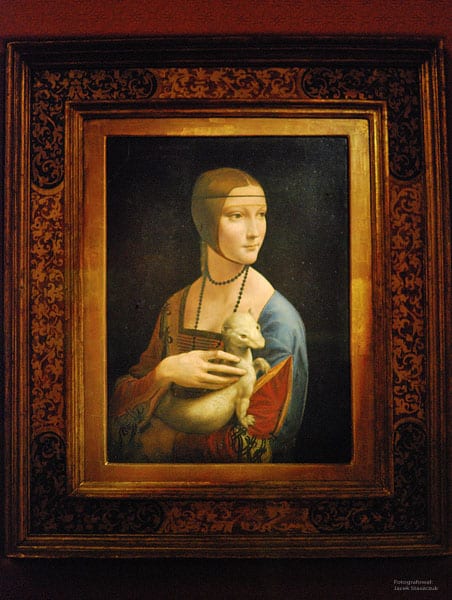 Lady with an Ermine in Czartoryski Museum in Krakow

“Lady with an Ermine”

In 1800 Princess Izabela received a unique gift from her son, Prince Adam Jerzy Czartoryski. He had traveled to Italy at that time and acquired Lady with an Ermine by Leonardo da Vinci, along with Raphael’s Portrait of a Young Man, and many Roman antiquities. Lady with an Ermine has been the most valuable item in the collection ever since.

The 19th century was very tumultuous in Poland and it is the most tragic period in Polish history. Princess Izabela’s collection had to be moved from Pulawy and hidden. It traveled across Europe during the course of 19th century. In the 1840s Prince Adam Jerzy, while in exile in Paris, imported his mother’s collection to a building a bought in Paris, Hotel Lambert. Hotel Lambert became the primary center of political activity of Polish emigration in France. All of the exhibits from Pulawy were displayed in Hotel Lambert, including the famous Lady with an Ermine. The collection was brought back to Poland in 1882. New premises had been bought in Krakow and the new chapter of the Czartoryski Museum began.

The collection had been moved to Krakow by Prince Wladyslaw Czartoryski. He chose Krakow to be the new home of Princess Izabela’s collection for a few reasons. The Czartoryski family had already had properties and estates in the area. Additionally, indisputable advantage of the new location was a relatively stable political situation. Krakow at that time was under the Austrian rule as a result of Partitions of Poland. 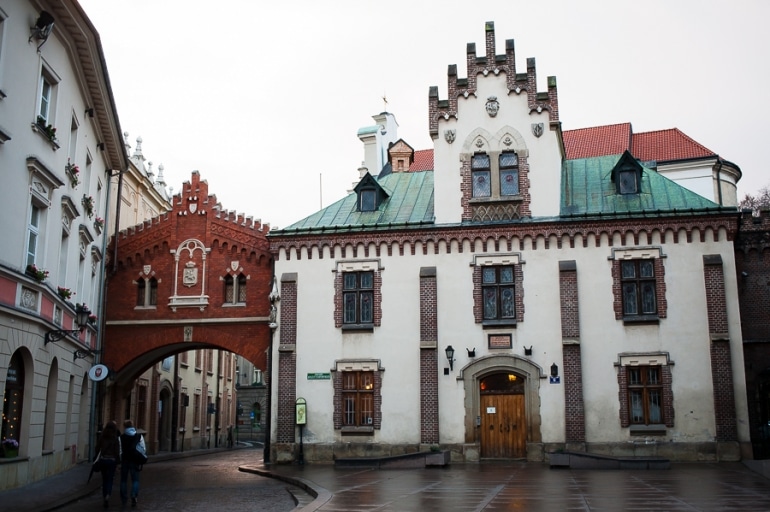 Museum was based in Krakow, in the ensemble of buildings in the streets of St. John’s and Pijarska. Prince Wladyslaw acquired the building of former municipal arsenal, the building of Piarists convent and three houses in the neighborhood. They were then connected and the collection was installed. The top floor was arranged as a family apartment.

Prince Wladyslaw not only created a new headquarters of the Museum but also significantly increased the quantity of the collection and changed its character. Sentimental memorabilia from the original Princess Izabela’s national heritage collection was enriched by unique world-class objects of art.

During World War II the Museum suffered serious losses. Portrait of a Young Man by Raphael was amongst the most valuable pieces stolen by the Nazis.  Lady with an Ermine was transported to Germany almost immediately after the invasion but thankfully returned to Krakow by the end of the war. Under the communist regime, the Museum was nationalized and turned into one of the National Museum branches.

Exhibitions in the Czartoryski Museum

In 1991 the Museum was returned to its rightful owners. The current head of the Czartoryski family, Adam Karol, established the Princes Czartoryski Foundation to administer the Museum. Since 1991 the Museum had been administrated by the Princes Czartoryski Foundation and the National Museum in Krakow took on-going care of its collections. In December 2016, the Foundation’s authorities sold the whole collection of the Czartoryski Museum and the Czartoryski Library to the Polish State for the price of 100 million Euros. This decision was widely recognized as controversial since it required unexpected last-minute amendments in the government budget and the negotiations were led in secret. The Czartoryski Museum was incorporated into the National Museum structures and turned into one of its branches.

Miniature portraits of the Jagiellonian dynasty, Lucas Cranach the Younger, 1555/1556

The most valuable object in the Museum’s collection is obviously the Lady with an Ermine. There are however more masterpieces by the most renowned European artists, such as Rembrandt van Rijn, Pieter Bruegel the Elder, Dirk Bouts, Vincenzo Catena, Joos van Cleve, Lucas Cranach the Younger and many more.

The Museum displays also important pieces of art for the Polish history. One of the exhibition halls is entirely dedicated to paintings of members of the royal families and great politicians in chronological order from 14th to the 18th century.

Another important exhibition combines portraits of the outstanding members of the Czartoryski family with Polish, European and Middle-East military equipment.

In 2010 the renovation works in the Czartoryski Museum has begun. The Museum is due to reopen in 2018.

Only the ancient art gallery in the arsenal (Pijarska street) is open for visitors.

Lady with an Ermine is displayed in the main building of the National Museum. Click here for more information.