John Paul II named Karol Wojtyła, born in 1920 in Wadowice, died in 2005. In the early years, he studied in Wadowice, but in 1938 he began his studies at the Jagiellonian University in Krakow at the Faculty of Philosophy, and in 1939 he began his passion for theater at the Dramatic Studio known as the Artistic Confraternity, which resulted in his performance in The Knight of the Moon. During the Nazi occupation, he worked as a messenger, then in quarries in Zakrzówek and in a chemical plant, and continued his passion for acting. In 1942 he entered the underground Archbishop’s Seminary in Krakow, and then studied theology at a secret department of the Jagiellonian University. Four years later he was ordained a priest and then continued his studies in France, Belgium and Rome. In 1948, he completed his doctorate at the theological department of the Jagiellonian University and became a vicar in Niegowić near Bochnia, a year later at the church of St. Florian in Krakow. In 1953, he obtained his habilitation, and a year later he headed the Department of Ethics at the Faculty of Philosophy at the Catholic University of Lublin. In 1958, he became a suffragan bishop, and in 1964 – a metropolitan archbishop, and in 1967 – a cardinal – the youngest cardinal in the world. On October 16, 1978, he was elected Pope and took the name of John Paul II, and on October 22, he began his pontificate. Karol Wojtyła is a man of many talents, speaking many languages, a poet, author of many scientific works. He was beatified on May 1, 2011, and on April 27, 2014, he was canonized, simultaneously with Pope John XXIII.

The museum was established in the Pope’s family home at 7 Kościelna Street in Wadowice next to the Basilica of the Presentation of the Blessed Virgin Mary, documenting the life and activity of the priest, as well as the Pope’s ties with Wadowice. The goal of the Museum is to commemorate and disseminate knowledge about the life and teaching of the Holy Father John Paul II, whose pontificate and message occupy a unique place in Polish national heritage. The museum tries to pass on to the next generations the person of John Paul II – as a model of a noble, wise, open to other people, enjoying authority and respect. The museum is visited by about 250 thousand tourists each year. 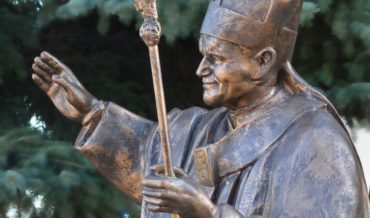