As a young boy living in Wadowice, Karol Wojtyla was exceptionally pious, but also interested in writing and theatre. In 1938, he enrolled at the Jagiellonian University and moved to Krakow to study philology. From the beginning of his stay in Krakow, Wojtyla was absorbed by the intellectual and artistic life of the city. He was encouraged to write poetry and joined an amateur yet successful theatre group. Soon after the outburst of World War II, however, the Jagiellonian University was closed by Nazi authorities. Karol Wojtyla then began working at the factory. Nevertheless, he had not given up his devotion to religion and theatre. In 1942, Wojtyla made the decision to enter a secret theological seminary.

After having successfully finished the seminary, Wojtyla was ordained a priest and then he celebrated his first Holy Mass in the crypt of St. Leonard. In 1942 he went to Rome to study at the Pontifical University of Saint Thomas Aquinas. When Wojtyla came back to Krakow, he soon became one of the most favourite priests, especially amongst the young. During the 1950’s he concentrated on his scientific and academic work. In 1958,  his episcopal consecration took place in the Wawel Cathedral, making him the youngest bishop in Poland.

Wojtyla used his position and popularity to keep the spirits of the Polish people high under the communist regime. In the 1960s, he was first promoted to the position of the archbishop of Krakow and soon was appointed cardinal. Using his influence, Wojtyla had been fighting for the permission to build a church in Nowa Huta, which the communist authorities did not want to give. In 1978 Karol Wojtyla was elected pope, John Paul II. 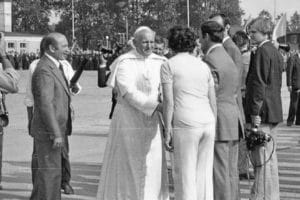 Karol Wojtyla soon proved to be a beloved new pope. However, two years after becoming pope, John Paul II was shot and critically wounded by Mehmet Ali Agca, a Turkish assassin. The pope was shot in the stomach, but after several hours’-long surgery, he recovered. Later, John Paul II  stated that Our Lady of Fatima helped keep him alive. After regaining health, the pope forgave the assassin and two years later he visited Agca in prison.

Pope John Paul II had travelled around the world to foster relations between the Catholic Church and other religion’s and to be close to the faithful. He first visited Poland in 1979. During this pilgrimage, at least 10 million Poles participated in holy masses and meetings with the pope. For the second time, John Paul II visited his homeland in 1983. As pope, he still remained strongly focused on addressing the political situation in Poland.

In 1987, the pope visited Poland again. His pilgrimage was yet again received enthusiastically amongst Polish people, who awaited the fall of the communist regime. Overall, John Paul II travelled to Poland eight times, for the last time he visited his homeland in 2002 when he consecrated the Divine Mercy Sanctuary in Lagiewniki.

John Paul II’s papacy is best described by the new customs he introduced to bring the Catholic Church closer to the people. Above all else, John Paul II was dedicated to pilgrimages. As the first act whenever he travelled, he kissed the land of the country to which he came. He was extremely popular, leading holy masses for large crowds, organised in stadiums, airports, squares, etc. John Paul II was known for addressing the people of the country to which he came with a pilgrimage in their mother tongue. Also, folklore groups were often invited to participate in masses. John Paul II put emphasis on meetings with clergy of other religions and visits to non-Roman Catholic temples. He was the first pope to ever visit a mosque and the first one to travel to the United Kingdom. During his meetings with the faithful, he was always direct and liked to talk and joke with the people.

John Paul II died on 2 April 2005. The beatification process initiated by the next pope, Benedict XVI, ended only four years after John Paul II’s death. He was then canonised in 2014.