Moses Isserles was a rabbi, Talmudist, philosopher and writer. He was born in 1525 in Kraków and died there in 1572. His ancestors came from Germany. His father – Izrael Isserles, expelled from Regensburg in 1519, came to Krakow and here in Kazimierz he remained engaged in trade and crafts, got married, established contacts with the court of King Zygmunt August, made a fortune and became the founder of one of the oldest synagogues in Kazimierz, later called Remu.

Moses was the rabbi of the Jewish community in Kraków. In 1550 he founded a Talmudic college in Kazimierz and was its rector, he had many students coming to him from various Polish lands and also from abroad. He enjoyed great respect and recognition. He was one of the most prominent representatives of rabbinic literature in Poland, he was the author of numerous works, such as “The Way of Moses”. Moses studied the philosophy of Aristotle, appreciated history and natural sciences – astronomy and mathematics.

The grave of Moses Isserles is located in the old Jewish cemetery next to the Remuh Synagogue in Krakow. Every year Jews from all over the world make pilgrimages there. Legend has it that whoever destroys his tomb in the same year will die. Even the Nazis during the occupation of Krakow were afraid of this prophecy.

Rate this post
Share:
Suggested
Suggested contents and articles.
Suggested Contents
Kazimierz town hall
Kazimierz, the current Krakow district, over the years was an independent village. In 1335 King Kazimierz Wielki gave it city rights, and the town was called after him. As the Kazimierz has been developing, there was a necessity to create a place for its government. As a result, in 1414,
Abraham ben Jacob
Abraham ben Jacob was born in the year 912 or 913. He was a traveler as well as a Jewish-Arab merchant from Tortosa, Spain. Abraham ben Jacob wrote about Poland in the accounts of his trip to Germany and the Czech Republic. He calls Poland the land of Mieszko I 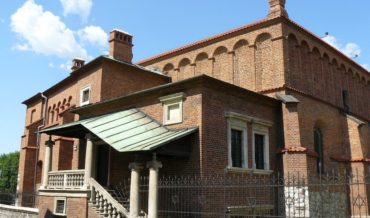