Is an attractive tourist destination, beautifully situated in a deep valley in the Jura Krakowsko-Częstochowska range, about 30 km north of the city center. The Ojców Valley is basically a huge rock chasm with perpendicular, white limestone walls, with the Prądnik River flowing in the middle. This is where one of the most beautiful tourist routes runs – the Trail of the Eagles’ Nests. It is a route leading between the Bobolice, Ogrodzieniec and Pieskowa Skała castles. Part of the Prądnik valley and the surrounding areas form the Ojców National Park with the Hercules club, which has become its symbol. Ravines, limestone spires, gates and caves are attractions to admire there, attractions created by mother nature.

The most famous cave that can be found there is the Royal Grotto, also known as Łokietka or Czajowska. The total length of the corridors and chambers of this cave is 250 meters. In one of the legends it is said that two kings were hiding there: Bolesław the Bold and Władysław Łokietek.

An important tourist attraction in Ojców is the “On the Water” Chapel, built-in 1901 on the bridge over Prądnik, because Tsar Nicholas II did not allow the construction of a church on his father’s land.

Ojców National Park boasts a rich flora and fauna, there are many rare species of animals and plants.

An interesting fact about Ojców territory is the fact that in one of the caves there, the oldest human traces in Poland were found, its age is 180,000 years. The oldest traces of a cannibalistic feast from Poland come from the Maszycka cave in the Prądnik valley near Ojców. Almost half of the bones found there by the archaeologist prove that the people of the cave were attacked by cannibals.

Rate this post
Share:
Suggested
Suggested contents and articles.
Suggested Contents
Caves, Grottoes
Caves, Grottoes are voids formed in easily dissolving rocks such as limestones, dolomites and gypsum. Most phenomena of this type such us caves, grottos, funnels or crevices occur in the Kraków-Częstochowa Upland, because it is largely built of Jurassic limestones. There you can admire numerous, lonely white limestone hills called 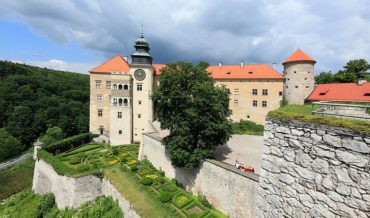 Pieskowa Skala
The castle in Pieskowa Skala has a long history as part of the Eagles’ Nests Trail. It is also one of the best examples of Renaissance architecture in Poland with tradition as a seat of several noble families. Located just 40 km from Krakow Old Town and surrounded by the astonishing
Comments
All comments.
Comments
Cancel Reply