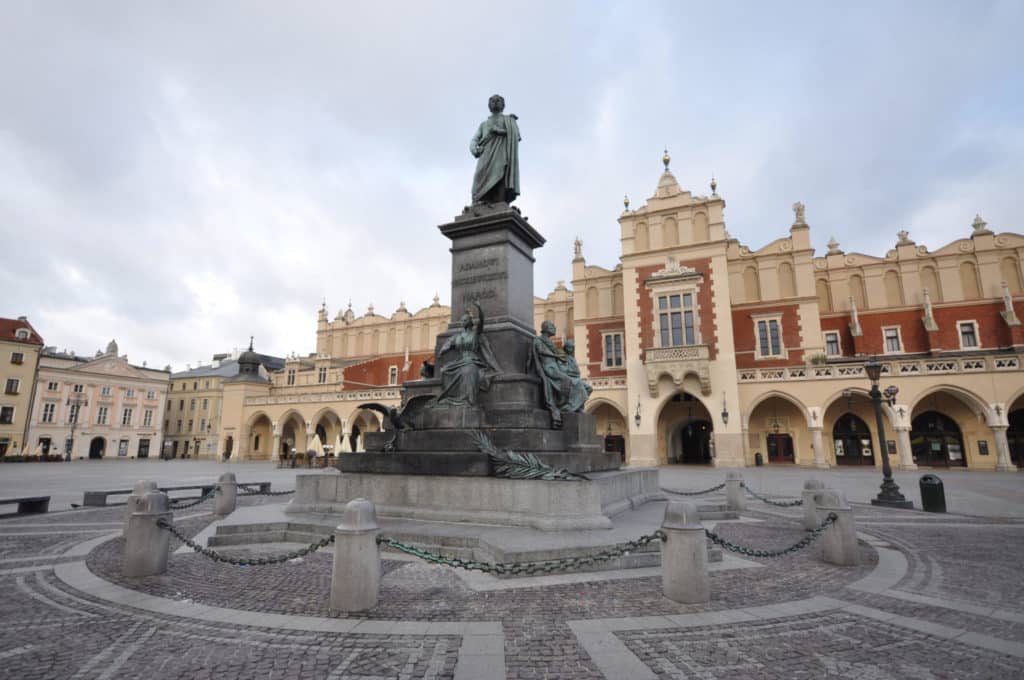 Adam Mickiewicz Monument is a memorial for the greatest Polish poet of the Romanticism period. He is a figure widely respected by the Poles and important for the Polish history and national spirit. He is regarded one of the “Three Bards” (along with Juliusz Slowacki and Zygmunt Krasinski). They were the Romantic poets, whose writing revolved around the Polish struggle for independence from foreign powers.

Adam Mickiewicz Monument is probably one of the most widely recognised bronze monuments in Poland and is undoubtedly the best-known monument in Krakow. It is a favourite meeting point in the Krakow Main Square and also a subject of various celebrations and local customs.

The Monument shows Adam Mickiewicz standing on a pedestal. Sitting at his feet are four allegorical figures. They symbolise: Homeland (the figure pointing at the poet), Science (old man with a boy), Courage (the figure on the side of the Cloth Hall) and Poetry (from the Church of St. Adalbert). The pedestal bears the dedication: “To Adam Mickiewicz – Nation”. 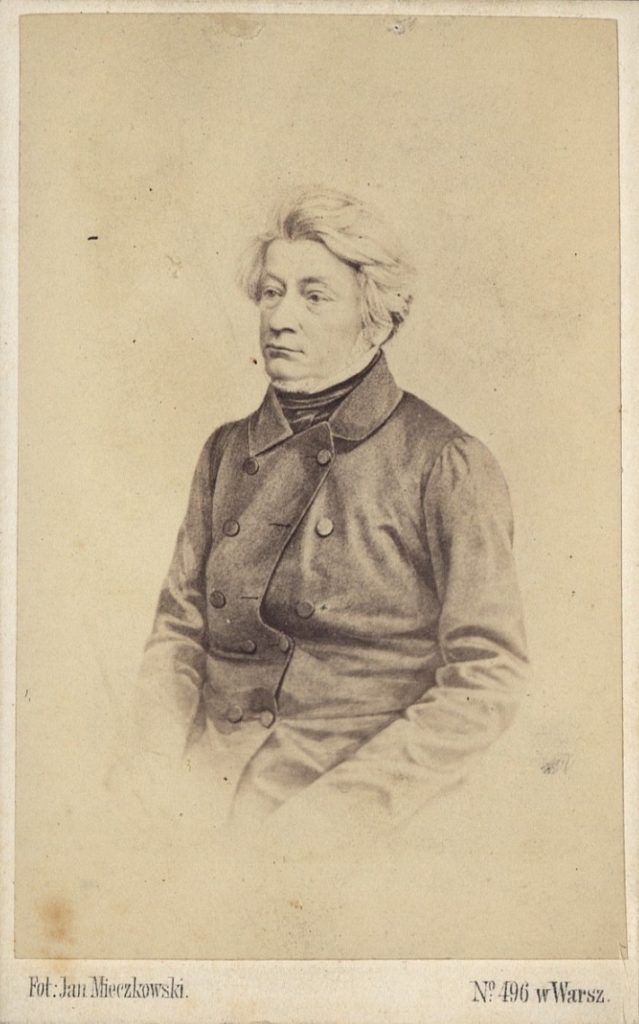 Adam Mickiewicz was born in 1798 into a family of poor szlachta (Polish nobility) in Zaosie (then Russian occupied Eastern territories of Poland-Lithuania, now in Belarus). In 1815, Mickiewicz enrolled at the Imperial University of Vilnius, studying to be a teacher. At that time, he got involved in a pro-independence activity in a secret organisation, the Philomaths. This eventually led to imprisonment and exile. He could, however, choose the place of exile and was able to perform his work. As a result, he was welcomed into the leading literary circles of Saint Petersburg and Moscow. In 1828, he published a poem “Konrad Wallenrod“. Its patriotic and subversive message had been missed by the Moscow censors.

After five years on exile in Russia, Mickiewicz received permission to leave. He then traveled across Europe, settling in Rome for some time and arriving in Paris in 1932. It is possible that in this time he helped the Polish underground during the November Uprising in 1830, one of the most tragic events in Polish history. The result of the November Uprising was the Great Emigration. Thousands of Poles, mostly Polish intelligentsia and upper-class, had to flee their motherland and seek for a safe haven. The vast majority of them settled in France. In Paris, Mickiewicz became active in many Polish émigré groups. He also finished two of his masterpieces there – “Dziady” and “Pan Tadeusz“. After they were published, Mickiewicz became less active as a writer and émigré activist.

From 1840 to 1844, Mickiewicz held the position of a lecturer in the newly established chair of Slavic languages and literature in the Collège de France. In this time he became obsessed with the concept of religious mysticism. His lectures became a medley of religion and politics. He criticised the Catholic Church. His views were radical to such extent, that it brought him under censure by the French government and a lay-off. 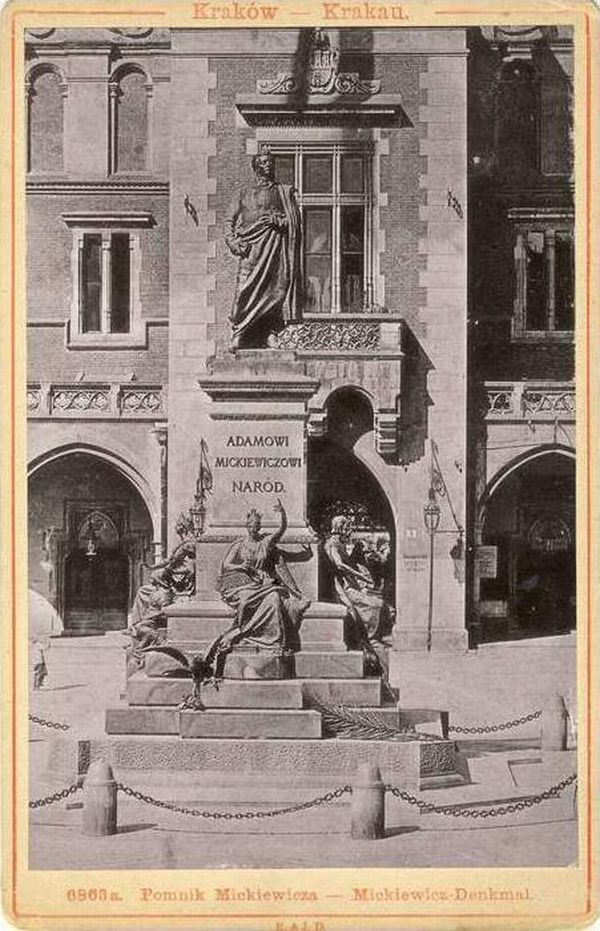 With the rise of revolutionary sentiment in Europe, Mickiewicz returned to the Catholic Church. Though his radicalism eased up, he remained to preach a messianic doctrine. He believed that Poland was destined to return to glory and by suffering was to bring salvation to other persecuted nations. The concept that Poland was the “Christ of Nations” was present in the Polish culture in the past and developed in the 19th century. Polish self-image as the martyr of Europe became dominant in the struggle for independence.

Adam Mickiewicz’s literary work became a canon of Polish national literature. His work is considered to be not only the greatest of all Romantic literature but also to be among the most important in Polish history. But Mickiewicz’s legacy reaches far beyond literature and extends to culture and politics. Adam Mickiewicz is considered to be the key figure of the Great Emigration. He is called the “national prophet” and remains to be among the greatest Poles in history.

The statue of Adam Mickiewicz on the Krakow Main Square was unveiled on June 16th 1898, the 100th anniversary of the poet’s birth. The idea to honour him with a monument in Krakow arose when Mickiewicz was still alive. After his death in 1855, artistic and literary circles began to debate on how a monument to the great Pole should look like. 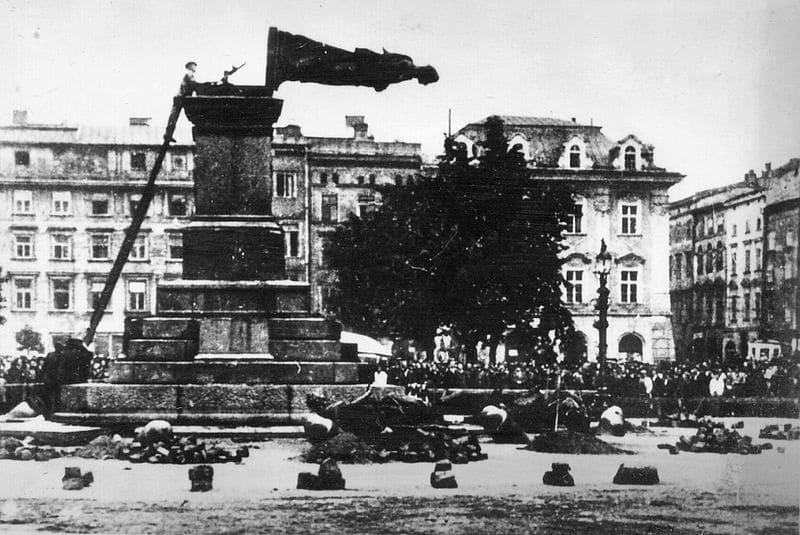 Destruction of Mickiewicz Monument by Nazis, 1940

It took many years to bring the idea to life. First of all, building monuments for patriots and national heroes were not welcomed by the occupants of the 19th-century Poland. Secondly, the pressure that the monument should reflect the greatness of Adam Mickiewicz was so big, that not a single idea seemed to be satisfactory. It took three contests and numerous submitted projects to decide which one should be realised. Revered artists, such as Jan Matejko, got involved. The disagreement was also on where the monument should stand and several locations were considered. Finally, in the late 1880s, the decision was made.

Adam Mickiewicz Monument had been standing in front of the Cloth Hall on the Krakow Main Square until it was destroyed by Nazis in 1940. Its wreckage was found after the war in the junkyard in Hamburg, Germany. The Monument was reconstructed with the discovered elements. The unveiling of the reconstructed Monument took place on November 26th, 1955, on the 100th anniversary of the poet’s death.

The Monument is now the favourite place to meet on the Main Square and almost every tourist have a picture with Mickiewicz. It is also a subject of several local customs. The best known is the tradition on Mickiewicz’s name day – December 24th. Every year on that day, the Monument is decorated with flowers. 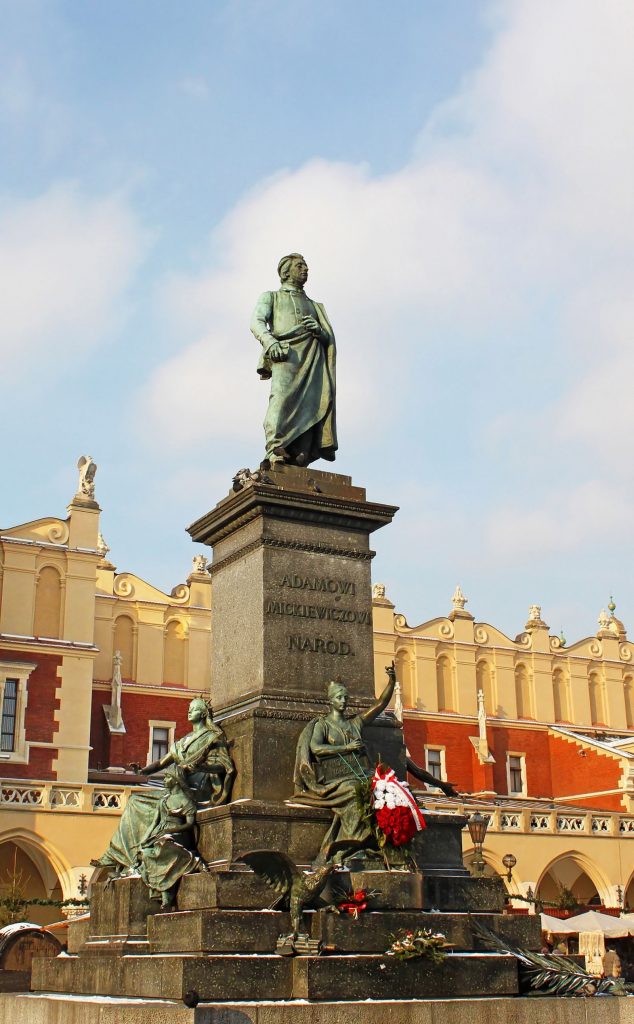 Each year before Christmas, Adam Mickiewicz Monument also serves as an exhibition space for the contest of Szopki. It is a local custom, dating back to the 19th century, characteristic only to the Krakow region. Szopka is a colourful, sleek, multilevel tower that presents the scene of the birth of Jesus combined with significant elements of Krakow’s architecture. Every year, on the first Thursday of December, contestants show their Szopki at the feet of Adam Mickiewicz Monument. A contest is held that selects and awards the best Szopka. They can later be admired on the display in the Krzysztofory Palace.

Adam Mickiewicz Monument is decorated with cotillions and flowers also on other occasions. This custom is informal and is enthusiastically adapted in many situations.

During Euro 2012 (organised by Poland and Ukraine), the Monument was embellished with cotillions with national colours. They were the colours of Poland, Netherlands, England or Italy, in the days when they played at the championship. National teams of Netherlands, England and Italy had their bases in Krakow.