“Mister of Krakow” is the title that was awarded to the winning building in the competition for the most beautiful and functionally built house.The competition was organised by the editors of the “Echo Krakowa” newspaper in the years 1964-1981. The aim of the competition was to encourage the construction of beautiful, historic buildings and the maintenance of the best building traditions. The winning designers and contractors received awards, medals and diplomas. The first building that won the competition was a residential building built in 1964 (10 Pokoju Avenue) and its designer was M.Sc. Eng. Tadeusz Wojczuk.

Rate this post
Share:
Suggested
Suggested contents and articles.
Suggested Contents
Where do you fly into for Auschwitz?
There are two international airports located within several dozen km of Auschwitz – Krakow Balice Airport (60 km) and Katowice-Pyrzowice (70 km). To get to Auschwitz from Krakow Balice you can take a train, bus (around 2 hours) or taxi (around 1 hour). Transport from Katowice-Pyrzowice is the same, but 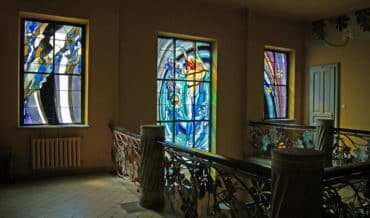 Wyspianski Stained Glass
Stanislaw Wyspianski was a Polish dramatist, poet, and painter. He created within the philosophy of Young Poland. It was an art movement at the turn of the 19th and 20th centuries that focused on decadence, symbolism and impressionism. This period is also associated with Bohemianism. The Young Poland Movement relates mostly to Polish