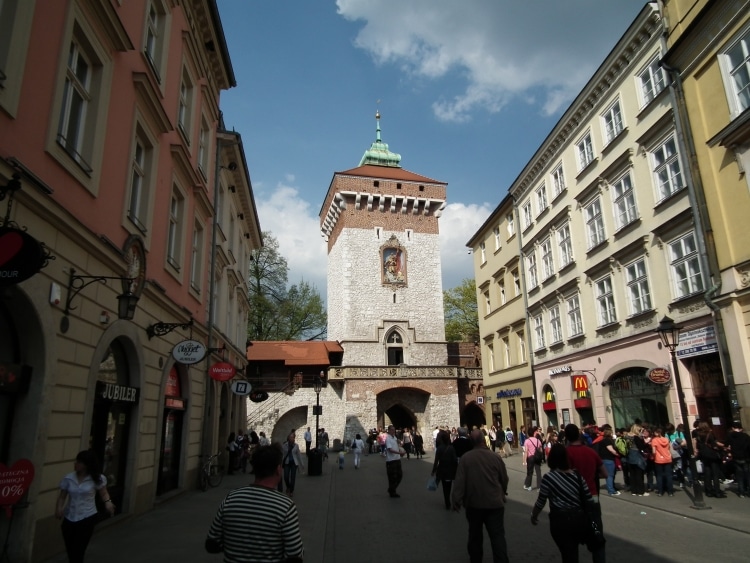 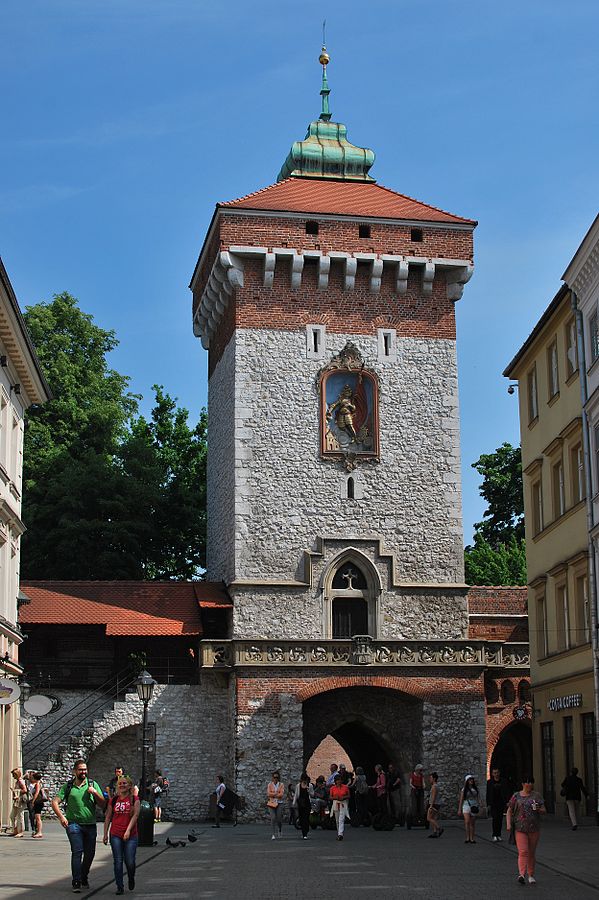 This was a major part of the Royal Road in Krakow, a route used for parades, coronation processions, etc. For centuries, kings, princes, distinguished guests, foreign envoys and national heroes entered through St. Florian’s Gate and traveled up to the Wawel Royal Castle. St. Florian’s Gate marks the edge of Krakow Old Town from the north.

St. Florian’s Gate was built at the beginning of 14th century. It is the only one, of the original eight built in the Middle Ages, preserved city gate. It was once connected with the Barbican as a defense complex of the northern section of the city walls. This part of fortification featured stone watchtowers, fortified gates, and a moat. St. Florian’s Gate became the main entryway to the Old Town.

The Gate is 34,5 metres high. In the late 15th century the tower was heightened and later, in 1660, a Baroque “helmet” was added. The face of St. Florian’s Gate from the Florianska Street, is adorned with an 18th-century relief of St. Florian. From the other side, the face bears a stone eagle, designed by Jan Matejko in 1820. It replaced a previous relief. Inside the gate, there is a classicist altar from the beginning of 19th century with the late-Baroque copy of the miraculous image of Virgin Mary.

Florianska Street has been bearing the same name for more than 750 years. It appeared for the first time on the foundation charter of Krakow in 1257. Florianska has been one of the busiest and most popular streets in Krakow ever since.

In 1330 there were already at least 10 houses on Florianska Street. Initially, the street had mostly residential character. The houses here were generally owned by affluent burghers and nobility. Since the end of 18th-century numerous hotels, restaurants and museums had been appearing on the street, gradually replacing the traditional residential function. In 1882, the first horse tram line started. In 1901 it was transformed into the electricity line (now defunct).

Townhouses on Florianska Street often have their own names and well-known stories. In the house number 41, revered Polish artist, Jan Matejko was born, lived, worked and died. Today, a museum dedicated to him is located in the building. Under number 45, Jama Michalika, a popular cafe with the history spanning over a hundred years, is located.

Today, most buildings still feature shops, restaurants, cafes, and clubs. Florianska Street is a major tourist attraction and the most vibrant street of the Old Town.