A term in economics that means restoring the former value of money. This term has also been adopted as a term for the renovation of architectural monuments in order to use them in accordance with their value. The attitude of the city authorities and the society towards the monuments from the beginning of the 19th century was not exemplary. In 1801, the Municipal Building Office was established by the city administration, its first activity being the demolition of old and ruined buildings. That year, Mała Waga in the Market Square was demolished, many tenement houses, the Kleparz town hall, the church of St. Stephen and others. Two years later, the city walls and towers were demolished. On March the 1st 1817, the law against house demolition was passed. It was then that the Krakow Town Hall and many dilapidated tenement houses fell victim. Some of the historic bars and portals were saved by Karol Kremer. The idea of ​​the protection of monuments and their conservation started to emerge. In 1830 the society of the Free City of Krakow took up the idea of ​​saving Wawel and established the Committee for Reparation of the Krakow Castle. Unfortunately, the fall of the Republic of Krakow and the replacement of the historic Wawel Hill by the Austrians with barracks delayed the implementation of the idea.
In 1840, Kremer started the renovation of Collegium Maius, paying attention to the styles, artistic values ​​and surroundings. After the great fire of Krakow in 1850, a plan to put the city in order and expand it was launched. In 1856, Paweł Popiel becomes a conservator to track and preserve monuments in Krakow. There were meetings in the city regarding the conservation of monuments, ways of taking care of them and carrying out repairs. Examples of restructuring may be Sukiennice or Wawel.
Krakow passed the Second World War with a safe hand, but immediately after it began restoration activities. Already in 1945, the Monument Architecture Office was established at the Municipal Board. The altar of Wit Stwosz, Collegium Maius, Wawel, Collegium Iuridicum, St. Andrew, the Landau Palace, removing the tram line from the Main Square. The city authorities make every effort to ensure that the heritage of the previous years is kept in perfect condition and not damaged by time. You came to your aid by adopting the resolutions of the Council of Ministers of 1974, which were groundbreaking for the conservation action.

Rate this post
Share:
Suggested
Suggested contents and articles.
Suggested Contents
Landscape parks
There are six landscape parks in Krakow: Bielańsko – Tyniecki Landscape Park – its area is 5410 hectares. It includes: Krzemionki Zakrzowskie, the Sowiniec range, the Tynieckie Hills, the Vistula gorge between Tyniec and Piekary, the Skołczanka reserve, Maiden Rocks, Bielańskie Rocks. Dłubniański Landscape Park: Its area covers 6,970 hectares.
Landau Palace
Located at 41 Miodowa Street in Krakow, the most beautiful secular palace was assigned to Jordan. Recent research has shown the vicinity of Nowy Square as the location of the Jordanian Palace. The palace at Miodwa Street was built in the 16th century. It closes Szeroka Street in Kazimierz from
Kremers Garden
The garden established by Jozef Kremer was located near today’s Kremerowska Street and the Carmelite Sisters’ garden. In 1821 in a newspaper called Telegraf garden was described as the nicest garden in Krakow, recommended for walks as it was a public place. Its ponds, boats and a summer house with
Lanterns of the Dead
Lanterns of the Dead were intended to illuminate Krakow‘s paths in the Middle Ages. They stood mainly in front of hospitals, poorhouses, monasteries, and most of them near church cemeteries, which is why they are called lanterns of the dead. Several of them still adorn Krakow, although most of them
Kremer Karol
Kremer Karol was an architect, restorer and builder. He was born in 1812 in Krakow. He studied at the Jagiellonian University, later became a builder and then director of construction. He married Maria Grabowska. Karol Estreicher was his brother-in-law. The main contribution of Karol Kremer was the introduction of modern fire 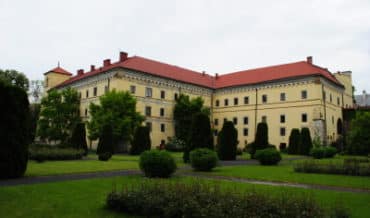